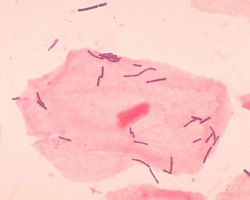 As I reported to the Guild last year, there is a lab at Harvard that is taking an unprecedented look into the microbial communities that make up the rind on aging cheese and they are finding astonishing interactions as well as residents that all help to create the local identity of our local foods. Now Dr. Rachel Dutton, a Bauer fellow at the FAS Center of Systems Biology, has piqued the interest of many gastronomists by studying the cheese rinds at The Cellers At Jasper Hill’s aging caves, and then opening up her appreciation of microbiological societies to look at other food fermentation processes like sourdough and yogurt. Her efforts have now been noticed by the New York Times Dining Pages quoting chefs that believe she is unlocking the mysteries of what makes the taste of place — what is terroir.

At the ACS conference last month we learned how animal welfare for dairy animals can be very troubling, and what is being done to correct bad practices on a local and national level. Many folks misstated that USDA Organic rules say nothing about animal welfare (yes, even Temple Grandin got it wrong when it comes to pasture requirements for organic dairy animals), leading many dairy farms to consider other certification choices specifically on that aspect of their husbandry. At the same time it’s always nice to read the positive side of dairy farming, the way we want to think about the farms who supply us with milk, which Nicolas Kristof provides in today’s NY Times. 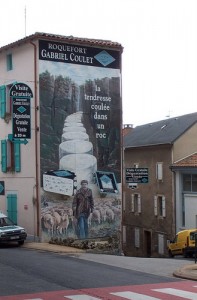 The village of Roquefort, France is located on the southern tip of the high Massif Central plateau about 100 miles from the Mediterranean Sea, and it is built into the cliffs containing the caves that “invented” blue cheese. Natural air currents vent these caves (called “fleurines“) and carry the naturally occurring Penicillium roqueforti spores through them, as well as keep the caves at a constant temperature and humidity. As part of the AOC definition of “Roquefort” cheese, all cheeses with that name must spend at least two weeks in these caves. This means that 24 hours a day trailer trucks full of young cheese are brought to the caves while each cheese that has already been two weeks in the caves are loaded back onto the same trailers and taken away to cold storage for final aging. Below are some pictures of the village, as well as of an antique cheese piercing machine that looks more like a medieval torture device (which is apt because long ago the Catholic Church purged non-believers from this region through a reign of torture and terror).
END_OF_DOCUMENT_TOKEN_TO_BE_REPLACED