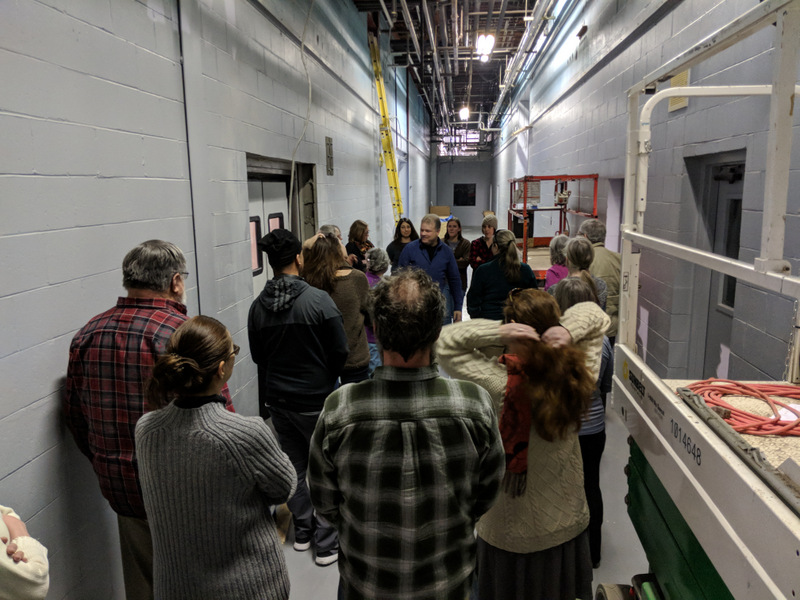 Progress continues apace as Pineland Farms Dairy Co. continues its transition from New Gloucester to the old Grants/Garelick plant in Bangor. President Mark Whitney hosted a Guild meeting at the plant in February which was still installing much of the infrastructure at that time. As of May 1st there are now rows and shelves full of aging cheddar blocks and other cheeses (as you can see in the linked article above) in the new warehouse space and the cut and wrap machines were being tested. By July he expects them to be making cheese in Bangor.

From Burlington you drive East and North to get to the small town of Greensboro (population 750 in the winter, up to 3000 in the summer) which is firmly embedded in one of the three counties that make up the Northeast Kingdom. I drove east on I-89, then exited in Waterbury where I started driving North, through the tourist haven of Stowe (with the trail-striped flanks of Mt. Mansfield looming over it). I turned off of Highway 15 in Hardwick onto local roads north to Greensboro Bend center, past Willey’s Store, jog left then right, then along a smaller road that turned to dirt (mud) as it rose up the side of the hill until a right turn where you could see the barn of Jasper Hill Farm painted with an image of the moon as a wheel of blue cheese.

And I must say that Moon Cheese is an apt symbol for this organization which is dedicated to making the very best products in the very best way while bringing very good jobs — not only at their company — to a beautiful area of Vermont that generally suffers from the same economic challenges as most remote areas of rural New England does. It’s the food industry equivalent of the Moon Shot…and it appears to be succeeding. It certainly helps that the Kehler brothers have a huge corporate partner for their Cellars — Cabot Cheese — as well as abundant access to capital resources for their own ventures. But that shouldn’t take away from the incredible hard work that’s gone into their project, as well as the thoughtful aim of a truly sustainable operation from start to finish. 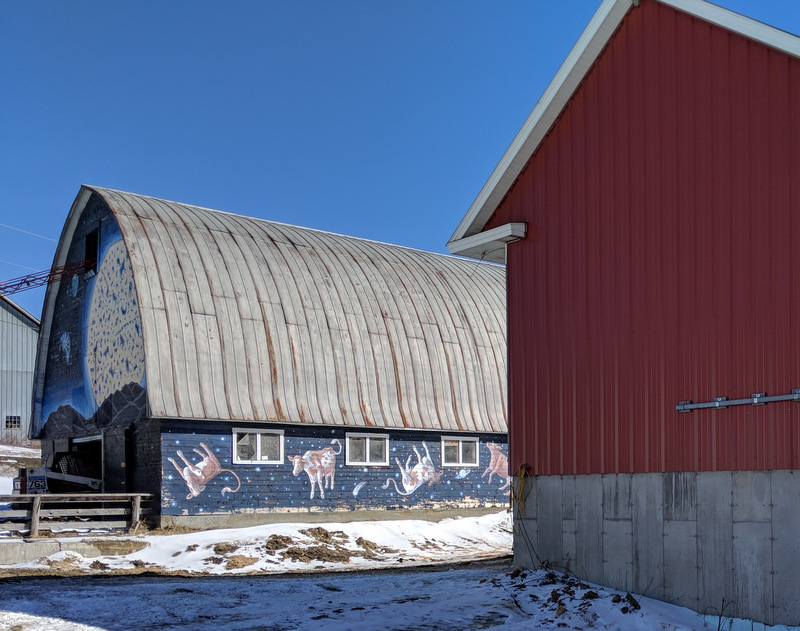 We checked in for our tour of the Cellars first. For those who don’t know, Jasper Hill Farm (JHF) makes several kinds of farmstead cheese from the milk of their Ayershire herd. In addition they have built a large aging facility across the driveway from the cheese production facility and the barns. It consists of seven concrete barrel vault chambers radiating out from a central work area. Each vault has a different characteristic, so this allows The Cellars at Jasper Hill (TCaJH) to manage (“affinage”) a wide range of cheese types, some of them their own, and some of them made by cheese makers elsewhere and then delivered to TCaJH for aging alone. Most notably Cabot sends all of their Clothbound Cheddar wheels to TCaJH for aging, and they were a partner in the effort to create TCaJH.

(As a side note, although JHF is certainly located in the seriously rolling hills of Northern VT, we learned that “Jasper Hill” actually refers to a person, one of the many Hill family members who farmed that area of Greensboro.

The design of their facility is embedded in their logo, as you can see above. The vaults are named #1 through #7 moving from left to right. We weren’t allowed to take pictures inside the Cellars, but below is a picture from their website (taken by Sara Forrest) of the entrance to the Cellars (during a slightly warmer season). The offices and cut/wrap areas are in front, and although you proceed “underground” from there, there are a lot of translucent panels on the front of the facility so that there is still a lot of natural light when you are inside unless you are working in a cave. 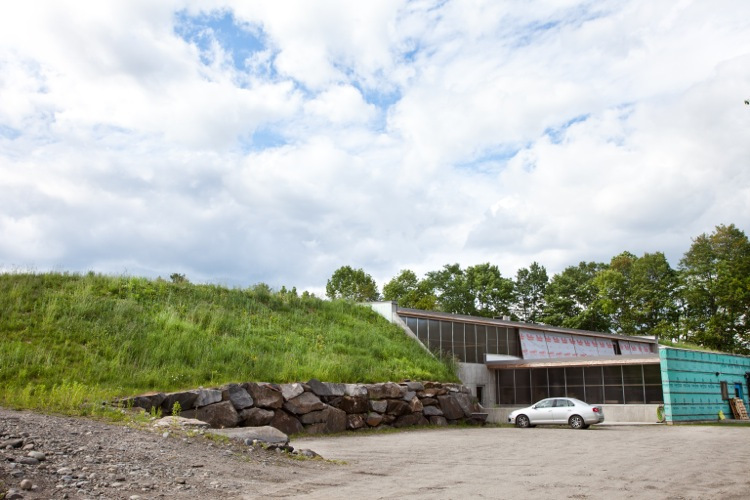 Before we entered the working part of the Cellars we suited up in disposable hats and coats and then found a pair of rubber boots that would fit us. Our guide — Monique — first took us to the largest vault — #4 — which was filled to the ceiling with Cabot Clothbound Cheddar wheels, two deep on each shelf. In addition to learning about how the Cellars were constructed, how the air exchange system works, and about the cloth and the lard that are used to cover the wheels of cheese.

While we were in that vault their new (as of 8 months ago) robot cheese flipper was in action in one of the three aisles. It looked something like an old fashioned phone booth, it was made of stainless steel and Plexiglas, and it had an arm with two small conveyor belts on it that pivoted to pick up each cheese, pull it inside the box, where the cheese was flipped and then brushed with a rotating set of vacuum cleaner brushes, then returned to the arm to be returned to its place on the shelf. It was very cool, and Monique said everyone was curious to see if there are any differences with the cheeses that had been flipped by the robot for their “entire life” (which is about 18-20 months). Already they can see a slight difference in the coloring of the wheels because the robot is much more consistent in brushing every square inch of the wheel than the human flippers were able to be.

Next we visited vault #1, which is much smaller than vault #4, and it’s where the bloomy rind cheeses start and bloom, mostly on stacked stainless steel racks. In vault #2 they were developing the washed rind for JHF large alpine style cheese called Alpha Tolman.

Vault #3 was filled with those same Alpha Tolman wheels after their rinds had developed and were aging out. They were actually remarkably red/orange in color, deepening as they got older. The flipper robot also turns all of these cheese once a week. In addition they had a special version of this cheese that had been shrink-wrapped with a coating of dried chopped sterilized hay bits all around it. The idea is to combine the flavor of the hay that the cows are eating together with the cheese made from their milk. This version of their cheese is made just for Saxelby Cheese Mongers in New York City. Alpha Tolman is also the cheese for which JHF has purchased an entire additional dairy farm nearby in order to use only that herd’s milk for one cheese. And because they wanted that cheese to be grass-based and produced year-round, they purchased the first hay drying facility to be built in the US.

Each of the vaults were “tuned” to a different level of humidity and temperature to accommodate the types of cheeses they would be developing. Vault #6 was probably the most specialized: it had no mechanical air flow and its temperature was minutely controlled using glycol tubes embedded in the walls and ceiling. This is where TCaJH takes care of their of their young and soft washed rind cheeses such as Winnimere and Willoghby. Vault #7 contained all of the blue cheeses, primarily Bayley Hazen Blue by JHF, along with a few other cheeses that they age for other local cheese makers.

Each vault has at least one vault “manager” who is in charge of working on and monitoring all of the cheese in each vault. As you might imagine, since each vault is different set of conditions and holds a different age and type of cheese, each manager has a deep and detailed knowledge of their vault environment. I was struck, in each vault, by how much they were willing to share with our visiting group, encouraging questions, and answering as thoroughly as they could.

The Jasper Hill Farm web site has a good run-down of all the cheeses that they age in The Cellars, including those that are aged for other cheese makers.

Outside of the vaults there is still plenty of action. In the center of the “hub” that links all the vaults together there is a specialized board washing room where they wash the wooden boards that have been used for cheese aging so that they can be safely re-used. In addition to tracking the lots of cheese being aged, TCaJH also tracks the lots of boards as they’re washed in case any issues arise that are board-based. And then there is the wrapping and packing room where all the cheeses ready to be sent to cheese sellers are cut, wrapped, packed into shipping containers, and then prepared for shipment. The crew that works there has to be incredibly flexible about their hours because the cheeses are not sent out to retailers until the Cellar’s manager thinks it is peaking. That can mean very little work one week, and then a whole lot of work the next. However the crew we met seemed very cheerful and welcoming especially when they heard that we were from Maine. 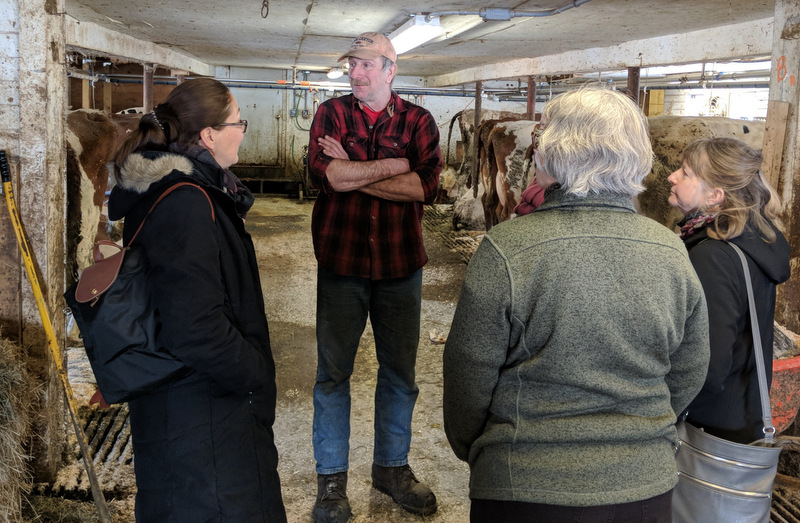 That ended the tour of the Cellars, at which point Monique took us outside to look through the windows at the cheesemakers in their very warm, wet (and foggy) cheese making space as they finished up for the day. Then we met Dave, the herdsman for JHF, who introduced us to their original Ayreshire herd of about 30 milkers. But most importantly Dave walked us around what they call their “Green Machine.” 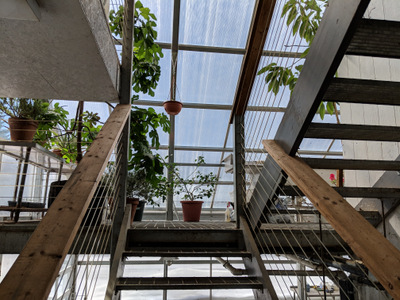 The “Machine” starts with a chain belt built into the floor that carries all the cow poop and bedding out of the barn, squeezes most of the moisture out of it, and then piles it outside of the barn over several loops of water pipes. As the manure composts and generates heat, the water in the pipes carries the heat into a greenhouse building as large as the cow barn. The liquid portion of the manure is fermented separately into methane that is also used to heat hot water. 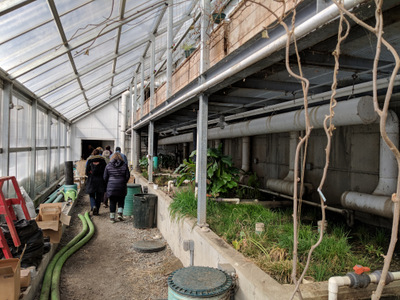 Inside the greenhouse is a plant-based filtration system that cleans up all the wash water from milking and cheese making before any effluent released as grey-water back into the environment. Among the plants kept year-round in the Green Machine are fig trees, pineapples, as well as a good sized banana tree. In addition to these tropical specimens, all of this heat is also used to grow greens and vegetables year-round, which are harvested and packaged up weekly as a benefit for the 70 employees working for JHF as well as TCaJH. We met the employee whose job it is to continuously seed, care for, and harvest the plants in the Green Machine. And in the same building are also offices for many of the managers, as well as a laboratory for quickly checking on the quality of each batch of cheese soon after it’s made.

It was quite impressive to see firsthand how “waste” can be turned into clean water, new food, and energy savings for the business. It shouldn’t be a surprise to learn that much of their whey now goes toward pork that they are starting to sell commercially as well. 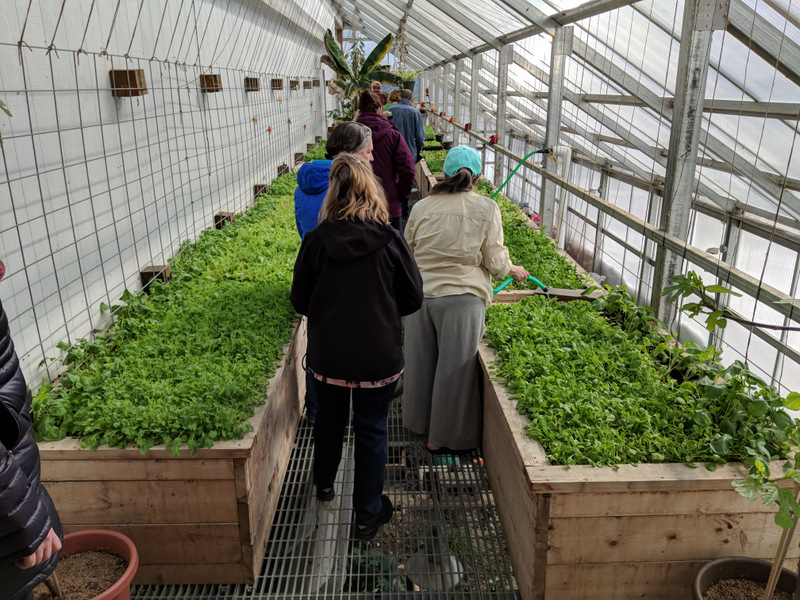 Monique offered to drive us over to see their hay drying operation, as well as their Alpha Tolman herd, but it was time for us to get some lunch and then drive 1.5 hours back to the Burlington area to visit Shelburne Farms. We thanked Dave and Monique for their time, and then many of us made sure to stop at Willey’s Store on our way back through Greensboro… 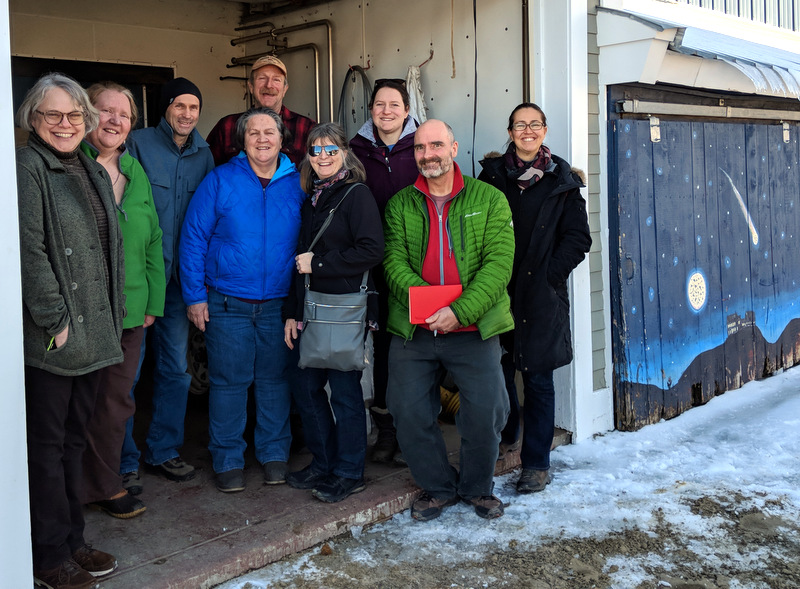