Our meeting from 10am to 2pm on Monday, February 18th at

covered our experiences finding and purchasing cheese making equipment and supplies. We were joined by a representative from Fromagex, and also had access to the latest catalogs from many different companies.

In addition, Guild members brought their own supplies/equipment to swap/sell with others at the meeting.

An often raised topic for our cheese makers is how to measure acidity, and what are the best tools for the task. Titratable Acidity kits are traditional, but messy and somewhat subjective (because it depends on the eye of the user to see pink); pH meters can be precise, but have been very expensive, delicate, and finicky.

As we learn in each workshop TA and pH both measure different aspects of the acid in our milk, whey, and curds, and they do NOT correlate, so the *best* practice is to use both methods to tell you as much as possible about what’s going on at the chemical level. Practically we all know that you can make cheese without measuring acidity at all, except by feel and taste of the curds, just as they have done for thousands of years. But the risks of bad, un-sellable batches for unknowable reasons imposes a real cost to this method of production as well. 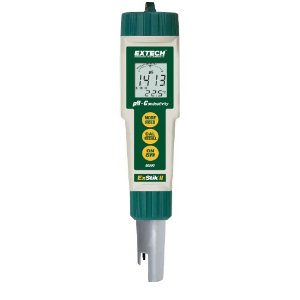 Dave Potter of Dairy Connection, Inc. led a Havarti workshop that I attended at the 2012 ACS conference, and during the make process he told everyone that he had found the “perfect” pH meter because it was waterproof, rugged (his first electrodes worked for four years before requiring replacement), the electrodes were flat so they weren’t at risk of breaking and could be used directly on the surface of draining wet cheese, it had a cap with a sponge to keep the electrodes moist, and it was relatively inexpensive. It’s the ExTech ExStik EC500 which also measures temperature and a few other things. Not surprisingly Dairy Connection sells them, but *surprisingly* they list it $20 cheaper than I could find anywhere else the Internet: $115 plus shipping. If this is your first pH meter you would also have to purchase buffers to use for recalibration (around $30 for the pH7 and pH4 buffers). You can also purchase the complete kit for the ExStik that includes cups, all the buffers, a carrying case, and other goodies. DCI doesn’t sell the kit, but you can find it elsewhere by searching for the ExTech EC510.

Watch out West Coast, the Maine Cheese Guild’s talented David Peterson is preparing his new Oregon cheese facility and will soon be creating his signature cheeses once again. Here he is with his new press. 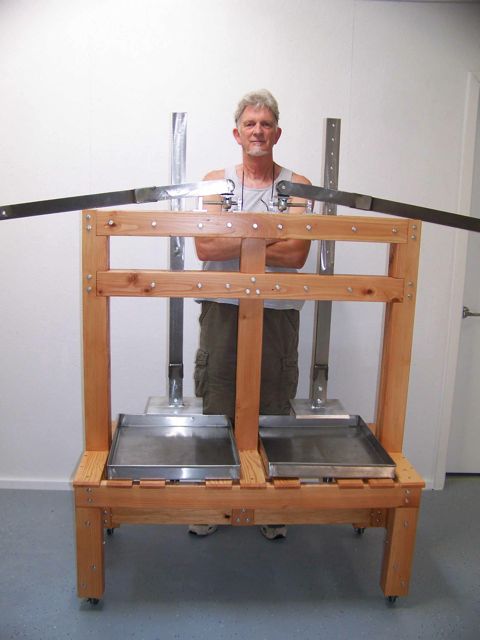