First up was an EARLY (7:15am) meeting of cheese Guilds with the idea of exchanging information, and trying to find out how ACS can better communicate with us as well, find out what they can do to help Guilds form and function without being able to dedicate significant staff time toward the effort. There were representatives from Massachusetts, Oregon, Missouri, Texas, Wisconsin, AZ/UT/CO/NM, South Atlantic states, Vermont, California, and Ohio. Several of the Guilds are brand new (OH, MA, TX, WI).

The first topic of discussion, initiated by the newer Guilds, was how inclusive or exclusive to be when considering members, specifically around the fear of allowing larger dairy processors to overwhelm the artisan producers. The existing Guilds explained how their organizations work, and overwhelmingly encouraged Guilds to be inclusive whenever possible because larger companies can sometimes be great assets to artisan guild members, but that a guild has to make sure their by-laws are very clear about how members can join and vote.

The question was ask: what can the ACS do for Guilds aside from providing staff time to help Guilds organize and incorporate? Especially in the case of producers who were so small that they could not justify joining ACS because they would not be attending the conference… Executive director Nora Weiser said that she hoped that the ACS could provide some kind of information transfer from Guild to Guild as well as between local producers and the ACS efforts to provide a voice for them in national conversations, such as the current FDA efforts. Vern Caldwell, a member of the Oregon Guild suggested that the ACS set-up and support a mailing list (Yahoo Group or the equivalent) that would facilitate some of the conversation between Guilds, and that ACS could jump in as they needed. Alyce Birchenough (Sweet Home Farm, a board member, and a member of a Southeastern states Guild) offered to become the Guild Liason for ACS. In addition Kate Arding, who is heading up the Regulatory and Academic Committee for ACS promised to monitor that kind of on-going conversation regarding the regulatory changes — asking for input, as well as passing along news for Guilds to help share.

After that there was a short discussion of the new instances of very small producers rejecting Guilds and licensing as being undesirable, but the meeting (which was scheduled for about an hour and 15 minutes) was already pressing against the first sessions, and most participants had to scatter. Names were collected, and email lists were promised to be disseminated.

My first session covered the tricky business for small scale (and even larger scale) producers to be able to sell their product AND make a profit at the end of the year. The first speaker spoke of the challenges when buying milk at its ever changing prices, and yet managing to price his own product without changing that price just as often. Of most interest to many members of our Guild, though, were tips on how to approach a price negotiation with a distributor or a retailer. His first statement was: “Price negotiation sucks.” And his second was: “buyers always lie.” Mainly he spoke about the need for cheese producers to do everything they can to control their own costs while making a high quality and consistent product; after that you need to find customers (and they ARE out there, he promised) who understood the risks that were out of your control, and who were willing to share some that risk with you. In return there was the possibility of a long-term sales relationship.

The second speaker, however, spoke much more relevantly to the issues most of us face. Mark Stephenson, a professor at the University of WI, presented a study that he did in 2007 that took a detailed look at 27 artisan farmstead cheese makers in WI, VT, and NY and tried to draw some generalities between their business practices and their profitability (or lack there of). There were lots of interesting items found in the details, and I will try to get a link to the PDF of his presentation that laid out the findings, but big items that I took away from his study:

Terroir Taste in Artisan Cheese: a study of Comté 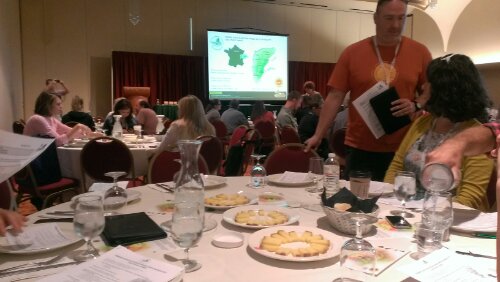 Next I got to taste more cheese! In this case it had a French accent — both in spelling and in speaking. Comté is an aged cooked curd alpine style of cheese made in eastern France along the Swiss boarder in the Jura section of the Alps. We heard from scientist who has studied how the terroir found in the Comté style of cheese — the production of which is highly regulated under the French AOC system — actually changes these cheese. We also heard from one of the Comté farmers who makes the milk for one of the 160 cheese makers (all cooperatively owned by the farmers) who make this cheese style. 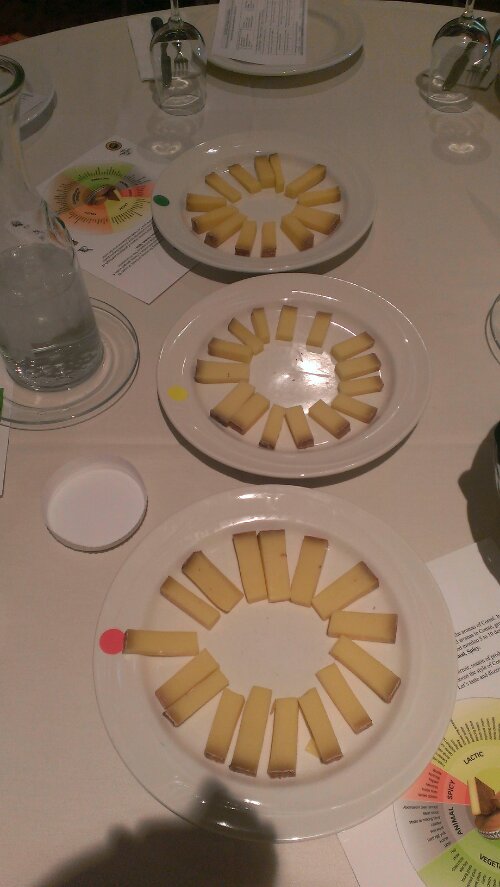 They have studied, in detail, the forage plants, local soils, and micro-flora for each of the 160 cheese makers. It turns out that the natural micro-flora found in the milk exhibit the biggest influence over the flavors in each cheese (although other factors contribute), and they have even shown that the micro-flora will out compete commercial cultures if they are added to the milk as well, and thus dominate the cheese chemistry. Obviously, even the cheese made the same way at the same production facility will change through the seasons with changing forage, and then type and duration of affinage can change the cheeses somewhat, but as cheese scientist Florence Berodier remarked: aging cannot create a flavor that wasn’t already in the milk.

Comté is made somewhat differently than much large scale cheese production:

As the farmer representative explained, they are very aware of how important the NATURAL lactic bacteria are in the production of their cheese, and as a result: “The less we touch the udder, the better the milk.” When asked what happens if a cow comes into the dairy with a dirty udder, the Comté dairyman said that they would clean the udder with water, but would not sanitize the udder. “We do not sanitize our udders or our equipment — we spend lots of time cleaning our equipment, but we do not sanitize it.”

During lunch I typed out a few of these blog entries while enjoying the view out the windows of the conference center of Lake Monona and the activity that continued to build as the countdown to the weekend became shorter and shorter.

The Life of Cheese

Heather Paxon, who just published a book of her research into the American artisanal cheese world with the same title gave an overview to a packed Lecture Hall at Monona Terrace. Beginning with a history of American cheese making — starting with home cheese making out of surplus milk for extra money on farms by women, through the transition to factories in the 1880s, then pasteurization in the 1930s — she researched where cheese stopped being only a commodity food, and became something that has now inspired 30 years of annual conferences to talk about. “Artisan cheese is NOT new,” she pointed out. “It’s newly valued.”

Paxon, who is an anthropologist now teaching at MIT, began her research in 2004 by focusing on a few dairy-centered states (NY, CA, VT, and WI), interviewing artisan cheese makers where ever she could find them, and eventually putting together a survey that she distributed in 2009. 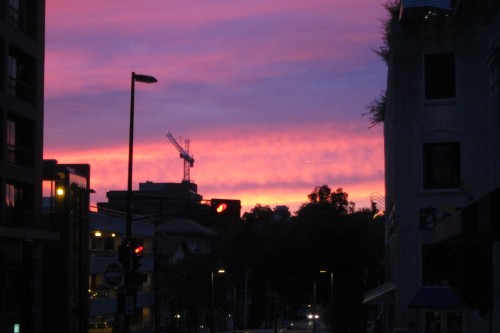