Click here to view Caitin Hunter’s photo album of her trip to the Abbey cheeses of Quebec.

Made good time to Montreal — 6.75 hours including a half-hour stop for lunch — and checked-in to my and Kevin’s Craig’s List apt rental. Good price, includes parking, but bare bones. As Kevin points out, “we’re going to spend about seven or eight hours here a day, max. What more do we need?” 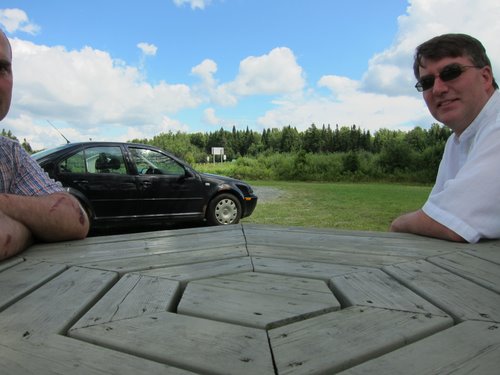 ER and KB enjoy lunch by the highway.

We walked the seven blocks downhill (therefore *uphill home*) to the Palais du Congress convention hall to register for the conference, and then split up so that Kevin could attend the reception for first-time attendees. 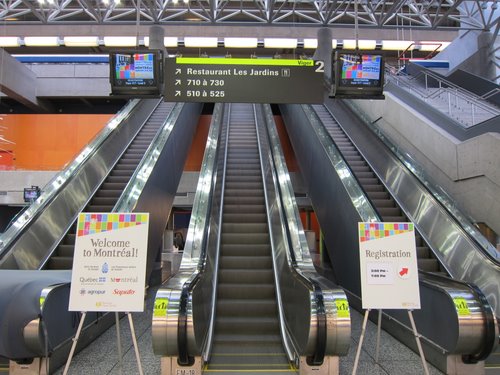 I wandered out to walk to our meet-up spot: Hurley’s Irish Pub about eight blocks west of the Palais, on the other side of the downtown area. 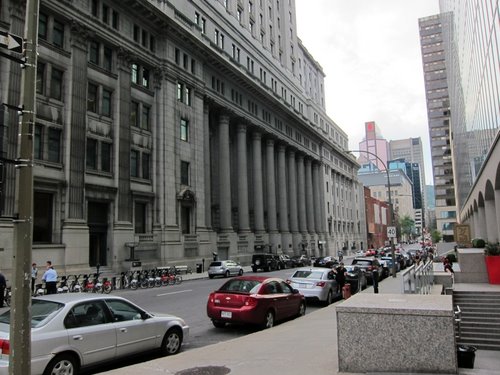 Downtown Montreal is a mix of old and new

The restaurant was empty (good for us?) at 7pm, but I chose a table big enough for the group, and ordered a Quebecois cidre and an introductory plate of poutine, the new official dish of French Canada: french fries and cheese curds drenched with hot gravy. Heart attack on a plate. Wow, it was hot and cheesy and so addictive I finished the first plate before anyone else arrived. 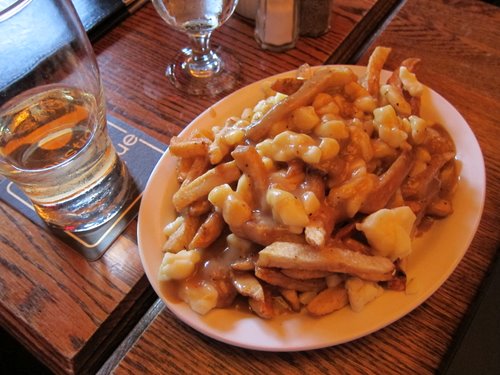 The pub was *NOT* right next to the Palais, so my choice of restaurant did require a walk of a few blocks; all the better to work off the calories necessary for ingesting a bit of frites, gravy, and curds. Around 7:30pm eight others arrived at Hurley’s, we quickly expanded our table, and got down to the business of refreshment. 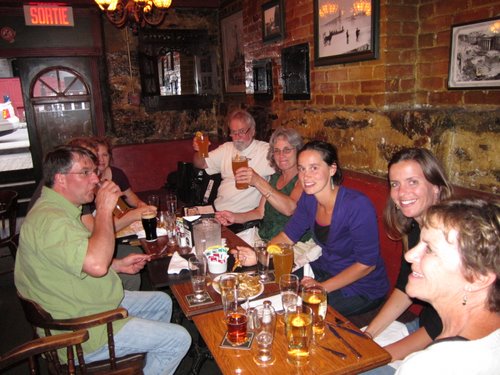 Maine Cheese Guild in Montreal on Day 1 of ACS

Mark Whitney and his wife were there, along with Kevin Burnsteel, Caitlin and her husband, Jamien Sheilds, Amy Clark and her mother, and me. Yes, Mark really was there, as you can see from this outtake from the first photo I took when no one else was smiling. The Hurley’s staff was very friendly and fascinated to hear that we were all in Montreal for a cheese conference — it turns out they all loved cheese! One of the waitresses said, “it’s funny because recently someone has been going around Montreal spray painting ‘I [heart] [wedge of cheese]’ in different spots of the city, which I think is the loveliest sentiment” — yes, she used the word “loveliest” to describe her delight in this graffiti. I told her that unfortunately that was probably the work of an enterprising PR firm hired by the American Cheese Society to try to subliminally inform Montrealers of the impending invasion of Cheese Geeks (right, Caitlin — Geeks not Nerds?), but her lovely helium balloon of wonder didn’t seem at all deflated by my cynical syringe. Good.

After some relaxing discussion of how we got to Montreal, what we were looking forward to at the conference, and the fact that the Champlain Bridge may be closed when we all attempt to drive home on Sunday(!?!?), and after more poutine was eaten, and belgian style wheat beer and draft Quebecois cider and other beverages were consumed, it was time to leave. 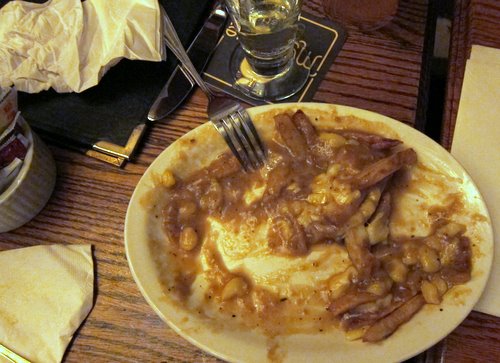