We woke up in Brockville, Ontario and my Dad took a walk while I re-iced the cheese. I had some re-frozen ice packs to insert, along with ice from the ubiquitous motel ice machine. I also had a digital temp gauge stuck in one of the boxes to monitor how fast it was warming. Yesterday it started at 37 degrees F and didn’t change even after I crossed the CAN border, so I switched the probe to the other box, which was at 39 degrees F in Montreal and then to Brockville. In the morning it was still at 39 degrees F. I added ice and re-frozen paks to all the boxes, and then put the big boxes in the trunk under a sleeping bag. The biggest box stayed at 39 degrees F through the day, even when we stopped for lunch and couldn’t find shade, so we covered the trunk with a white cloth anchored by the boxes of brochures that Jennifer provided. 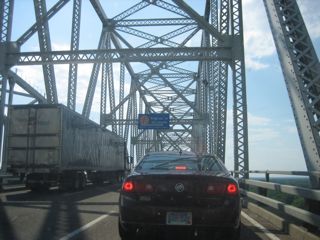 The day started overcast, but the sun came out for real by 11am, and stayed out until we reached our stopping point. This seemed especiallhy brutal as we inched over the Point Huron, MI bridge and customs crossing, but the temp gauge was solid at 39 degrees F the whole time. At the border I was terrified that the border agent would see the wire for the gauge sticking out of the box and immediately call the Marines in, but he didn’t — he had more of a problem with the boxes of brochures…!?! (He said, “you know, using an international bridge for commerce could make you liable for stiff duty fees…” but he let us go with ‘just a warning’ — ouch.)

When we stopped in East Lansing, MI the probe read 41 degrees F. I re-iced everything before we retired — this room didn’t have a refrigerator in it, but they provided a tiny one when I asked. Still I could fit about nine of the smaller paks in the little freezer section overnight. Unfortunately, I didn’t remember that even though they were flexible when I put them in the tiny freezer compartment, they were very stiff when I tried to take them out. It took quite a bit of manipulation to wiggle them all out, but I did, and then iced everything else. Those extra plastic bags that Cathe had offered when I picked up the cheese really came in handy. I made sure to park on the south side of the motel building so that any morning sun would be blocked.