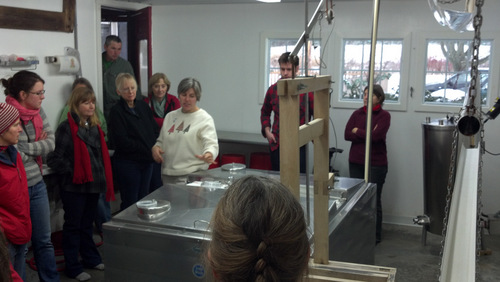 Our next meeting was our annual Holiday Party at Balfour Farm in Pittsfield on Monday, December 10th. We enjoyed pot luck lunch items and things that went well with tasting our NINE differentHoliday Havarti examples made by members in October.

Every year the Maine Cheese Guild asks members to make the SAME cheese recipe at the SAME time of the year with their own milk and methods. The goal is to have that cheese reasonably ripened by our Holiday Party at the beginning of December. At the party we display all the cheeses, then taste every one, and inevitably no two cheeses are exactly alike. It proves that cheese can be a very individual product, and even when two cheese makers start with the same recipe and ingredients, there are many small and subtle decisions made in the vat, as well as during aging, that can make significant differences in the end product.

This year we chose to make a WASHED CURD* cheese style called “Havarti” after the Danish town of Havarthigaard north of Copenhagen. It is known for its mild creamy flavor with big buttery notes, and a soft texture with many “eyes” throughout the cheese, which are formed by a gassy culture called Leuconostoc mesenteroides. Normal production ends with the cheese being either waxed or vacuum sealed in plastic for aging. It can, however, develop a natural rind through washing and encouragement of the same molds that make traditional “stinky” cheeses: Epoisse, Brick, Muenster, etc. The buttery notes in these cheeses were so prominent that when we tasted the washed rind versions of Havarti, everyone had the same impression of a “lobster” flavor, probably because the rich butter notes and the mild sulphur notes replicated the flavor of cooked lobster dipped in butter. It was quite yummy.

*WASHED CURD cheeses are made by removing a portion of the whey mid-way through stirring the curds, and replacing the whey with the same amount of hot water. This does two things — it raises the temperature of the curds (forcing whey out), and it reduces the lactose in the whey (and thus in the curds) so that there is LESS for the cheese cultures to eat during aging, and thus less lactic acid is produced, making a mild cheese, and contributing to a soft and pliable texture. Another well known washed curd cheese style is Gouda.

We will post photos of the cheese soon. Thanks to all the Guild members who participated and drove through some dicey weather to celebrate the holidays with lots of Havarti. And thanks to Balfour Farm for hosting a terrific party.