Saturday dawned clear and beautiful and it somehow seemed appropriate to get an early start and walk on up to the Capitol square where the Dane County Farmers Market, the self-proclaimed “The Largest Producer-Only Farmers’ Market in the U.S.” It is set-up ringing the Capitol. COMPLETELY ringing the Capitol building, facing in on the sidewalk. Even at 7am there were enough people that you couldn’t start and stop walking without being mindful of bumping into folks. Lots and lots of veggie stands, naturally, but a few (not as many as I would have thought) cheese vendors, a bunch of meat vendors, a bunch of bakers, and then some specialty stands of flowers, popcorn, and — YES — The Gourd Guy. 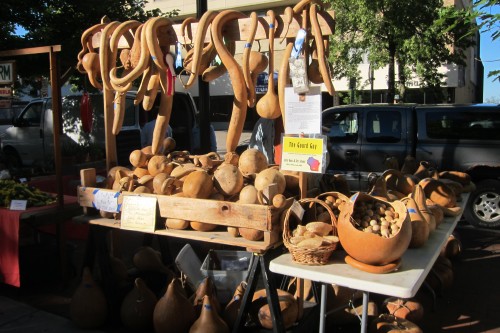 Striving for a Successful FDA Inspection

This is becoming a necessary skill these days, even for producers who do not ship out of state. ACS presented a good presentation today consisting of two ACS members who have “survived” FDA Inspections who told their stories of what to expect, followed by a food safety consultant who explained what you MUST do and what you can decline to do during an inspection.

Peg Smith of Cow Girl Creamery spoke first. CGC has been in business for at least 20 years, and they now have two cheese making facilities, plus a distribution center, and all three have been inspected at least once. The Kenny Mattingly of Kenny’s Farmhouse Cheese in Kentucky spoke from the point of view of a newly started cheese business (within the last five years) who was inspected during a transition between outgrowing an old (first) cheese plant and moving into a newly constructed plant next door. Then Alan Sayler from the Center for Food Safety and Regulatory Solutions talked about the nitty gritty of what the FDA *can do* by law during an inspection, and what rights a cheese plant has during an inspection, plus helpful tips on how to understand what’s going on, and how to “get the most out of” the inspection.

There’s SO MUCH I could write here, most of which would be boring step-by-step items, and some of which I’ll go over in a presentation to the Guild in person at a later meeting. Instead I’ll provide a couple interesting and pity points that jump out from the pages of notes I took:

The Art and Science of Smear-Ripened/Washed Rind Cheeses 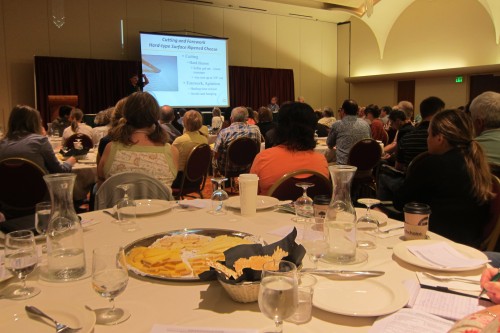 Talk about drinking water from a fire hose, this session was chock FULL of information…a little too chock…but our presenter warned us going into the session that he was condensing a short course that they teach at the Center for Dairy Research at the University of Wisconsin that is normally taught over three or five days, and that he wanted to make sure he left some time for the tasting, and for questions…and away we GO!

At lunch we were offered pre-wrapped sandwiches to take along with us while we visited the Dane County Farmers Market just up the street if we hadn’t already done that. 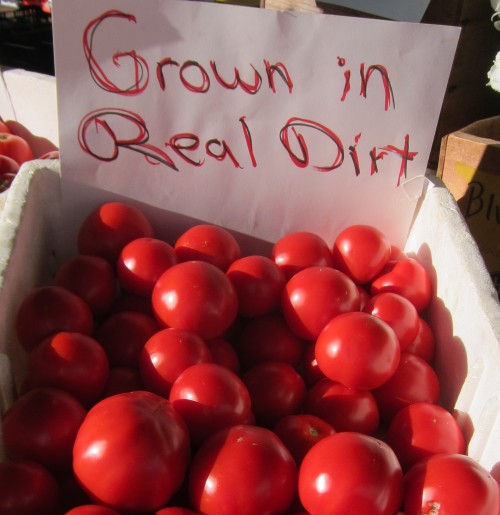 Rules number one in attempting to fix a “flaw” in your finished cheese is to DOCUMENT everything during the make and aging process. [One person’s flaw can sometimes be another person’s unique flavor/texture that customers are willing to pay for…] If you don’t know what you did, or what happened at the beginning, you don’t know what you can change.

Item one for cheese makers and mongers alike: Retail abuse is a major source of abuse. You can make the best cheese in the world, but if it sits on a hot loading dock in the sun for an hour, no one will recognize the result, and if that’t abused cheese is still put in the front of the public the reputation of the maker AND monger are affected (fair or not). Part of a cheese makers responsibility is to understand the custody chain of their cheese to make sure the consumer purchases the cheese they thought they sent to them through whatever distribution method.

Following these general thoughts, Nana Farkye (CA Poly State) and Mark Johnson, (UWisc DRC) walked us through a FIREHOSE of information about common defects and the possible fixes. A rather subjective sample follows:

Summer milk often is produced by a heat stressed animal, which lowers the protien and fat content, but not in the same proportion so your ratio can change wildly, often with much lower protien. This can result in lower yields and/or a HIGH moisture cheese and all the problems associated with that unless the cheese maker stays right on top of their milk quality.

Sometimes a high moisture cheese can result in a high acid curd, which can produce brittle body, grainy mouth-feel, weepy cheese once it’s packaged, and a soft pasty body. This can be fixed by using less culture, reducing the ripening time by adding the rennet earlier, and rinsing/washing the curd.

Bitternes factors can be attributed to:

Other flavor defects were catagorized into Microbrial, feed, mechanical (agitation, pumping), and brining issues. Texture defects could also be microbial related, or make related (how the curd is treated in the vat before forming into wheels). Visual/packaging defects can also be microbial, but often involve temperature and/or light abuse.

It also shouldn’t be a surprised that many defects — specifically the microbial based — were a result of poor or uninformed sanitation routines.
Overall the instructors assured the cheese makers in the audience that EVERY defect has been seen before, and once the source of the defect has been determined, it CAN be fixed. The hardest part is finding the source of the problem, especially when it may be out of the cheese maker’s control, hence the DOCUMENTATION and CUSTODY CHAIN points at the beginning, but it all boils down to knowing as much as possible about your cheese, from the raw ingredients through the retailer treatment. Good luck!