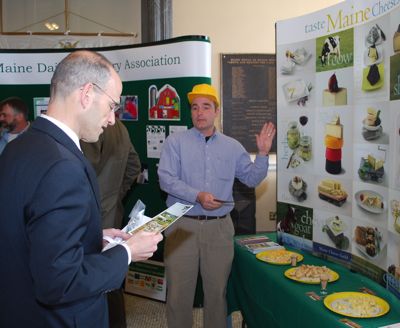 Above you can see me telling Governor Baldacci about how Maine Cheese is such a great dairy success story!

Along with about thirty ag focused groups, I spent the morning of March 31 offering samples of Maine cheese (thanks to State of Maine Cheese Co., and Pineland Farms) to state house workers and legislators (in between sessions) and asking them if they’d like to know more about Maine cheese. Most of the did, and most of them very much liked the samples of the cheese.

For the legislators, I handed them one of the color Guild brochures and pointed out that when we printed the brochure two years ago there were 20 licensed cheese makers in Maine (as it states in the first paragraph of the brochure), but that currently there are 37 licensed cheese makers, which shows how many new folks are stepping up and putting more Maine milk to good use.

I also pointed out that Pineland Farms wasn’t making cheese three years ago, and now they’re growing by leaps and bounds, making hundreds of thousands of pounds of cheese in New Gloucester.

I told them that in the last two years Maine Cheese Guild members had won 24 awards at the American Cheese Society annual competition, the largest North American cheese competition featuring cheeses from all over the US and Canada. I also said that Pineland Farms had entered a few international competitions recently and won awards there as well!

With Maine dairy farmers facing a perilous future with the current low price of fluid milk, I thought it was important to point out that value-added dairy processors in Maine have been having great success recently, often selling their cheese well above market average prices, and often paying well above the base price per hundredweight of milk that the legislature currently subsidizes through the Maine’s Dairy Stabilization Tier Program payments.

At the same time that Maine is experiencing growth in the quality and quantity of value-added dairy products, I pointed out that the Legislature and Department of Agriculture have been cutting back on the very minimal support they give to Maine cheesemakers: cutting back from three to two dairy inspectors to cover the entire state, and most recently cutting back at the dairy testing lab. These cuts seemed counter-intuitive, given the industry’s success, and I told them that the Guild felt they damaged Maine’s ability to effectively regulate this important dairy industry. I acknowledged that they are in a most difficult situation given the failing economy and increasing budget deficits, but that cutting effective state services could, in the long run, damage the industry it’s meant to support.

But overall I tried to keep the message up-beat and positive, and it always helped to offer them another sample of excellent cheese!