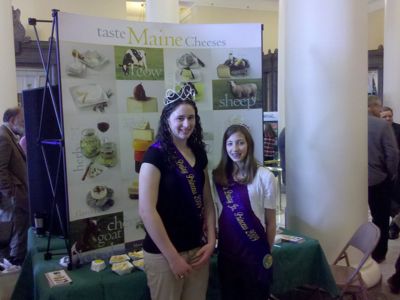 It was a wet Wednesday as Maine’s food producer representatives set up displays in the hall of flags in the Maine State House to meet and feed the Legislators as they cycled in and out of meetings and sessions. I had plenty of cheese donations, and everyone who passed our table stopped and said, “oh, I LOVE cheese!” before diving into our samples. Barbara Skapa from Echo Ridge Creamery arrived midway through to bring more samples and give me some assistance.

I got a chance to talk to a lot of legislators, and I told them first that “cheese is a Maine dairy success story” and then told them how Maine cheese makers will make at least an estimated (by Mark) 700,000 pounds of cheese this year, up 400% from eight years ago. Further, it’s safe to say that Mainers eat at least 30 *million* pounds of cheese every year (conservative based on a national average of 31 lbs. per person), we’re hardly supplying 2% of Maine’s total cheese consumption. At the same time, Maine cheese has been winning ribbons at regional (Big E), national, and international cheese competitions, going up against cheese powerhouses like Vermont and Wisconsin, and proving that Maine cheese is as good or better than anything out on the market.

If they didn’t say, “that’s great!” and back away at that point I continued: “At the same time over the last eight years Maine has lost over 100 dairy farms — going from 420 in 2002 to 315” (according to the Maine Milk Commission). That’s a quarter of the farms that make up the backbone of Maine agriculture, and ought to be recognized as the crisis that it is. I told them straight up: “Whatever we’ve been doing to help dairy farms over the last eight years has NOT been working. We have to do something different because without Maine milk we can’t make Maine cheese.” Obviously there are some cheesemakers who produce their own milk, especially the goat cheese producers, but if there are no dairy farms to support feed, equipment, and dairy supplies dealers it would make it much more difficult to manage a dairy goat herd. So at the very least the dairy farms help support the infrastructure that all dairy farmers depend on.

If they still appeared engaged, and not ready to bolt, I said, “So in the face of a true dairy success story — rapid growth in sales and new cheese makers, national and international recognition of the high quality of Maine cheese — the Department of Agriculture have submitted budgets cutting critical direct support to dairy processors, and the Legislature has voted to implement these cuts.” After we would discuss different ways that cheese making in Maine could be supported, and I thought a good place to start would be to restore the third dairy inspector.

Later in the day the Commissioner of Agriculture, Seth Bradstreet, came over to say hello. He mentioned that some of the legislators I’d been talking to told him that we were lobbying to restore cuts to the Dairy Inspection program and Milk Quality Lab. He was surprised, he said, because he didn’t think he had cut ANY money from those programs while he was commissioner. I questioned that, pointing out that we were told about cuts at the Milk Quality Lab just this year…? He said that wasn’t true. I moved on to say that by not restoring the third milk inspector — who had been so helpful to me when I first got licensed — during a period of rapid increase in the number of dairy processors, the Dairy Inspection program was becoming reactive rather than proactive, I and said that the Guild didn’t think this was the right way to run an inspection program. He told that the Department of Agriculture intended to grow the numbers of dairy inspectors through their latest effort to combine the dairy inspectors with the other food inspectors in the Dept. of Quality Assurance under Hal Prince. He said that he expected the other inspectors to be cross trained in dairy inspection, and therefore we would “soon” get more skilled inspectors to take over some of the work that Audrey and Jim have been doing alone for the past four years. He said that one inspector had already been trained enough to go out on the road. He said that once more of the inspectors were cross-trained that Audrey would be assigned only the biggest and most difficult cases to apply her experience and knowledge to.

The conversation with the Commissioner was never heated, and he complimented the Guild on the awards our members had been getting. At the end he insisted that we contact him directly if the Guild didn’t like something, and offered to be available anytime we needed him.

Over all I think I got the message out that: cheese is a growing and more visible component to Maine Agriculture, at the same time that Maine Agriculture, and especially Maine Dairy, was facing challenges. The Guild didn’t think it was wise policy to cut support to this Maine dairy success story, and we think that if Maine legislators thought about this, they might take another look at when they can cut too far.