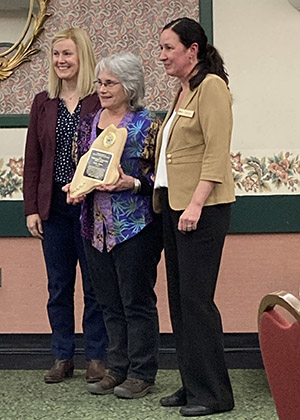 AUGUSTA, Maine – Today, Department of Agriculture, Conservation and Forestry (DACF) Commissioner Amanda Beal named Caitlin Hunter the recipient of the 2023 Commissioner’s Distinguished Service Award. Hunter invested more than 40 years in raising goats and making cheese and has been called the “Bedrock of the Maine Cheese Guild” and “cheesemaker extraordinaire.” The Commissioner’s Distinguished Service Award is presented to individuals who have significantly contributed to Maine agriculture. The award was presented at the DACF’s Maine Agricultural Trades Show Commissioner’s Luncheon on Tuesday, January 10, 2023, in front of representatives of all four Congressional offices, state legislators, past DACF Commissioners, and over 300 friends of Maine agriculture.

“I am honored to present Caitlin Hunter with the Distinguished Service Award. She earned this recognition because of her pioneering vision, determination, and unstoppable talent,” Commissioner Beal said. “Cheesemakers across Maine applaud Caitlin today for inspiring an industry with her remarkable skill and leadership.”

Caitlin Hunter’s cheese making started over three decades ago when she began selling her soft goatcheeses at a local farmers’ market. In a little over a decade, she acquired more goats, built a barn and a brand, and received state licensing for Appleton Creamery. Her products reached consumers through sales at the Belfast and Camden Farmers’ Markets. With support from MOFGA, she and other cheese makers formed the Maine Cheese Guild in 2003. Through guild classes, the skill set of Maine cheese makers expanded, and the Maine artisan cheese sector was launched. Today, after retiring from cheesemaking to enjoy life with her husband, Brad, she offers her knowledge to the industry through her consulting business, Capercaillie Consulting.

“As the Maine Cheese Guild celebrates its 20th anniversary in 2023, it is exciting to see one of its principal founders receive recognition for the hard work and dedication it takes to succeed in running a cheesemaking business while mentoring many others along the way. Since forming the Guild in 2003 with Caitlin’s leadership, we have grown from a couple of dozen cheese producers to over 80. I offer heartfelt congratulations to Caitlin from myself and her many friends throughout the entire cheesemaking community for receiving this honor from Commissioner Beal.” – Ron Dyer, Executive Director, Maine Cheese Guild