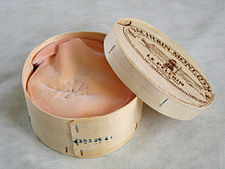 The New York Times reports on a new American cheese that’s being offered by a Wisconsin cheesemaker based on the Mont d’Or idea of a super soft bloomy rind cheese wrapped in a spruce strip during aging. The interior will get soft enough inside the rind that it can be scooped with a spoon for service, rather than need to be sliced. Another interesting aspect of this cheese is that they’re apparently aging it for over 60 days.

Maine has plenty of spruce for this kind of experiment, although I’m pretty sure that wood from the white spruce would be preferable to the black spruce (aka “cat piss spruce”)…does anyone have experience with this?