Click here to see Caitlin Hunter’s photo album of her second day at the conference, including her TWO competition ribbons! 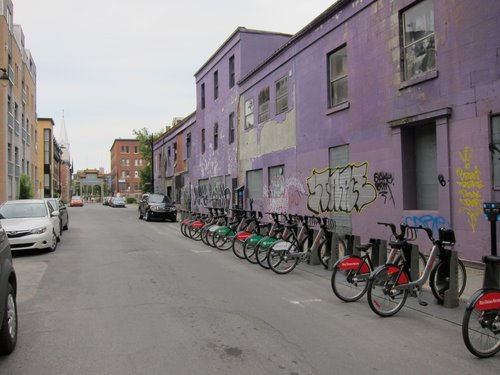 The start-time for the conference is regressive: 7:00am on Thursday, 7:30am on Friday, and 8:00am on Saturday. I know this because you must get your tickets for the tasting events on the day-of that event, and those times are when registration opens. So this morning, I got up and took advantage of Montreal’s Bixi bike service to pedal the six blocks downhill to the conference center by 7:15 this morning and managed to snag one of the first tickets to the Fermented Foods tasting this afternoon. Yea!

Following breakfast the ACS held a Town Hall Meeting so that they could get feedback from the general membership. They were open to all topics their membership wanted to talk about, but they announced up front that the board was most interested in hearing what the membership thought about the *amazing* growth that has occurred in American cheese making over the past twenty years, and how ACS should plan for additional growth in the next ten years as growing pains become more and more apparent.

One of the other topics focused on was regulation, or rather self-regulation whenever possible. Given that state licensing requirements are so varied and run the gamut between lenient and overbearing, with the passage of the recent Food Safety legislation at the federal level, and with the increasing publicity of all food safety issues in the news, cheese makers in the ACS and beyond are nervous about what the regulatory landscape will look like in a few years. Therefore many cheese makers are asking ACS to help the industry get ‘in-front’ of federal efforts, so when the FDA decides to change things up, we will be able to say “we’re already doing that ” or be able to immediately challenge any rule that would unnecessarily restrict the types of cheese we can make. Will Studd, and cheese journalist from Australia was invited to give his viewpoint on the current state of US cheese regulation, and his message was: “The rest of the world is WAY ahead of the US in terms of requirements for meeting HAACP type guidelines in order to be licensed. Be prepared, because the question isn’t IF but WHEN…” Several of the members who spoke to this topic supported some kind of certification opportunity that would allow cheese makers to demonstrate basic competence in dairy science as well as sanitation practices. Currently only Wisconsin requires this kind of certification for cheese makers in the US. This whole topic should be pretty familiar to us in the Guild.

I started my day with a workshop on Controlling Pathogens in Cheese. Presenter Dennis D’Amico of the Vermont Institute of Artisan Cheese, quickly changed the title to “managing” pathogens in cheese right before he began his talk. As a beginning cheesemaker, I want to be as educated as possible on this topic, and was really looking forward to hearing what Dennis had to say. He began with a brief history on the research of raw milk cheeses, the evolution of our current standards in place today, and the reasoning behind why regulations may change in the very near future. He went into great depth about the safety of raw milk cheeses, but to sum up the main message, I’d have to say the only solution to “managing” pathogens in cheesemaking is to reduce risk on your farm. Implementing risk management plans, identifying the hazards or weak points in your process, and continually working on strengthening those points, is how we control hazards. I learned that pathogens can survive differently in cheeses so identifying the point where the risk is highest during your process for whatever specific cheese you make, is the best time to test them. Testing your cheese at that point allows you to monitor and verify that your management plan is working rather than only testing when the cheese is ready to be consumed.

As I mentioned in my review of Day 1, the focus of the conference seems to revolve around change and preparing for it, rather than just reacting to it. The strategies Dennis discussed are in line with this exact message – have a plan and verify your process to make sure you are managing the microbial activity in your cheeses, and not letting them manage you.

I had scheduled myself to attend a seminar called “Controlling Pathogens in Cheese Production.” However, the Palais des congres room numbers are a bit confusing, and I wound up in a seminar next door called “The Cheese Chain:HAACP and Traceability from Farm to Fork” and I thoroughly enjoyed it. This followed up on the regulatory discussion at the Town Meeting, but this one had tangible examples from a dairy scientist, a cheese maker, a distributor, and a retailer. I really enjoyed it, despite the seemingly dry subject matter. The panelists did a really good job at making sure they didn’t drift into regulatory-speak, and did a good job translating the most important points for the needs of the average person in the cheese business. It turns out, each one of the panelists pointed out, that the bottom line is that most of what we need to focus on is common sense. 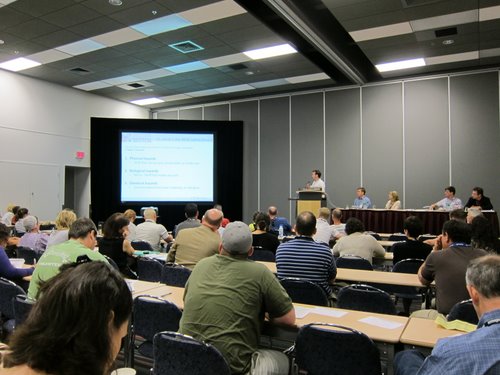 The cheese producer representative was head of Quality Control from Rogue River Creamery in Central Point, OR, which is a much bigger operation than most of us in Maine, but the items she reviewed are mostly applicable to all of us. Again, common sense prevails. But it was most interesting to learn about the challenges faced by distributors and retailers in maintaining the chain of safety, as well as being able to react to issues that “flow downstream” to them.

Sorry ACS/Palais Food Services! I took the opportunity to visit Montreal’s Chinatown, which is right next to the Palais, and treated myself to a Sumo Ramen bowl for lunch.

I went on to attend a workshop on Methods of Coagulation which taught me a lot about rennet, acid and acid-rennet coagulation, and what exactly is happening in the milk during that phase of cheesemaking. I need all the help I can get when it comes to milk chemistry so reviewing this information was timely and beneficial. I’ve been wanting to reduce the final moisture content in my aged cheese, so cutting the curd early can help whey expulsion resulting in a lower moisture content. Weaker curds tend to shatter more quickly resulting in loss of yield, so that’s something I’ll have to be careful of. It seems so obvious now. Again, I can’t wait to be back to the cheese room and get back to work.

I attended the tasting seminar titled Fermented Foods where we would pair several beers, breads, and cheese together to explore the possible 1+1 = 3 opportunities when combining these three foods that all depend on culture and time. I know, I know, you’re starting to feel sorry for my having to taste, and sip, and taste, and chew for an hour and a half — and it’s not even during one of our formal meals! Well, I knew the ACS would be desperate to fill their meeting hall, so I thought I’d sacrifice and help them out. 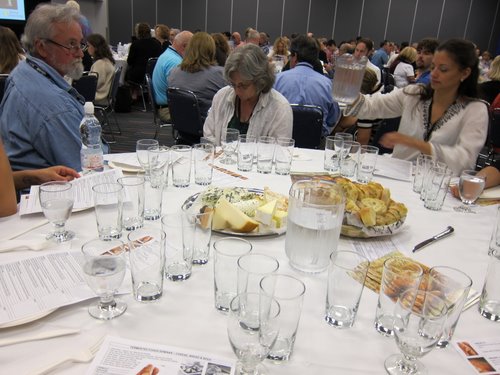 All kidding aside, the format of the tasting was to taste a beer alone first, then combine a specific bread with a specific cheese, then combine the bread with the beer, then combine all three together. You learn quickly how much each component can affect the other, and how different each component reacts in each different reaction. Of course this is all really good food, but not all the combinations work, and it’s as important to what doesn’t work, and why, as well as to appreciate when all of them add up to a sublime result. 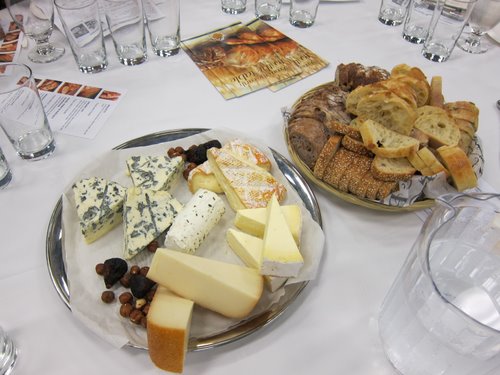 The breads where all provided by Premiere Moisson, a very large Quebecois baking (and charcuterie and fine foods) concern with 20 bakeries in the Montreal area (and more across the province) and $90 million in annual sales. They have recently partnered in a flour mill in Quebec that will allow them to customize their flours, as well as to source grains for their flours directly from farmers. They were an “organic log” of white bread with a sesame crust, a raisin and honey and hazelnut sourdough, a green olive and chives loaf, a walnut sourdough, and a straight baguette.

The beers were chosen by a Quebec beer journalist, Mario D’Eer, founder of BiereMAG, who pointed out that in French “la biere” is a feminine noun, while “le fromage” is masculine. He explained, “I believe this is because when you drink a beer, you undress it, because when you are through you are left with the lace undergarment. And cheese is fat and it stinks.” Needless to say, the capacity crowd found this amusing even before we started drinking beer. He chose beer from the same Quebec brewery (Unibroue) and made in the belgian-style, bottled unfiltered with low hops levels: a light beer called Blanche de Chambly, a brown “strong” beer called Maudite, and a black beer called Trois-Pistoles. 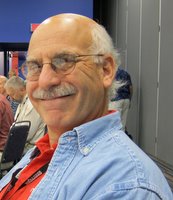 The cheeses were a mix of cow (St. Andre bloomy rind, St. Albray white/washed rind, St. Agur blue), goat (Ile de France Chevre log with Fine Herbs) and sheep (Etorki washed rind). Most interestingly I was joined at our table by Jeff Roberts (left), author of the Atlas of American Artisan Cheese, who is a big fan of Maine cheeses.

From my tasting notes: 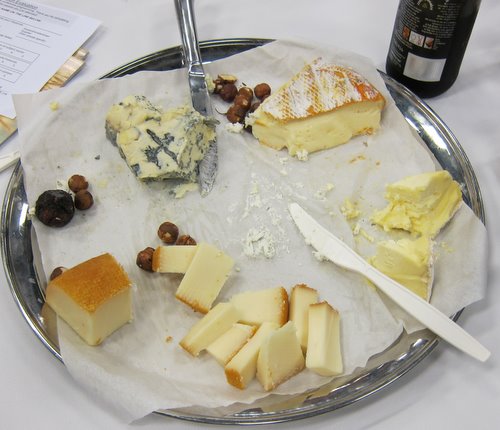 Yes, and now we get to where dreams meet reality: being judged by your peers. The 2011 ACS Judging and Competition Awards were handed out in a large conference room at the Palais, and Maine did well, but not as well as some past years. The Maine Cheese Guild contingent met in the front left section of the auditorium to cheer each other on, but our cheers were few and far between. Following, in the order of announcement, are our highlights: 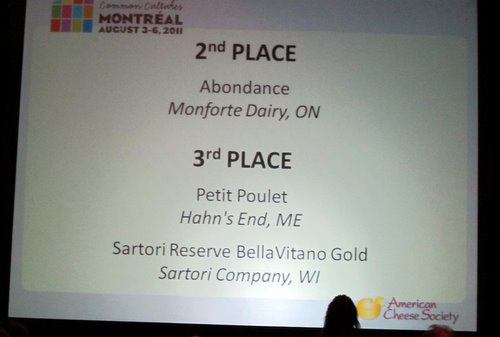 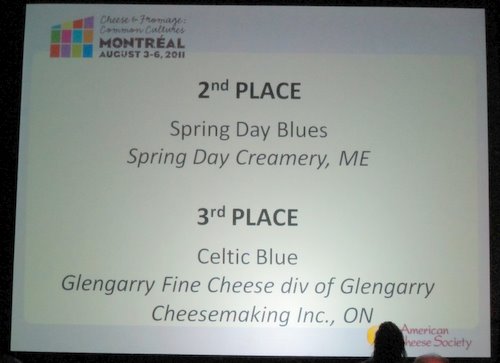 For Yogurts, Plain, Made with Sheep’s Milk 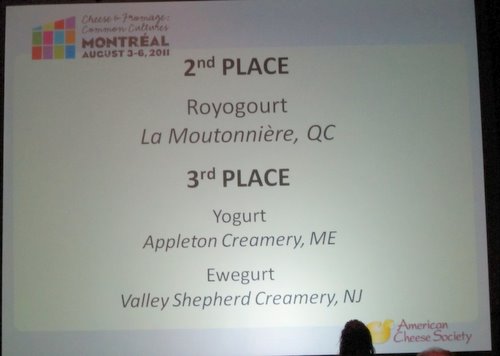 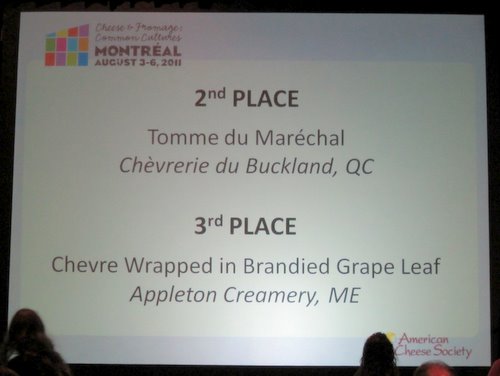 Congratulations to our three Guild winners in 2011!