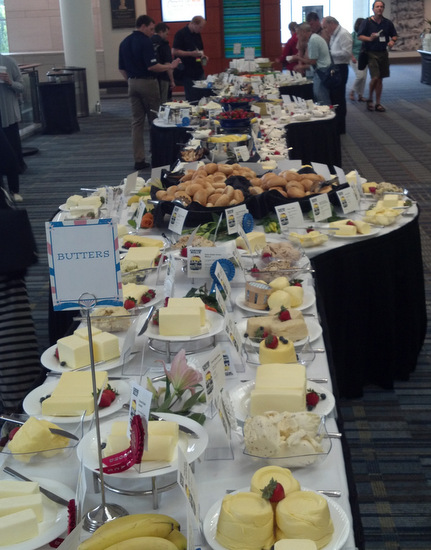 Good morning Raleigh Convention Center! Someone finally had the amazing idea to offer ALL the cultured dairy products like Creme Fraiche, yogurt, ricotta, and other mild less-than-solid competition entries for saturday breakfast (now called “Breakfast of Champions” because the awards are nestled with the winners, just like at the Festival), instead of presenting them with all the cheeses at the Festival of Cheese on Saturday night.

Wow! Instead of looking at them as the lonely girl/boy at the evening party (because they’re so awkward to sample when you’re standing up holding a glass of beer or wine), they are the Star of the Morning and you can really appreciate a selection of them for breakfast. I had tastes of as much as I could and wanted to go back for more, except I was at the breakfast to network with other cheese guilds around the US. 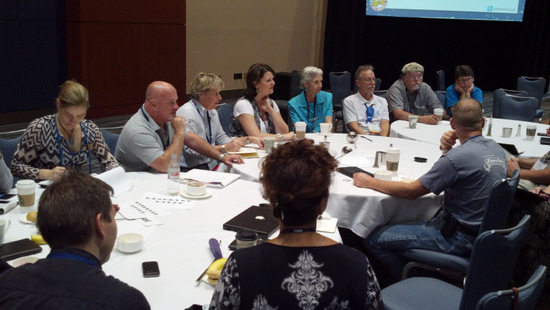 At the opening breakfast on Wednesday the ACS staff announced that they wanted to get Guilds together to see what was going on around the country, what the Guilds were up to, and to share the good ideas and try to benefit from everyone’s experience. I was able to tell folks what we are up to, and that in my opinion I thought our Guild was working well for most cheese makers in Maine. (If you disagree, please comment on this article so I can hear about challenges I may not be aware of.)

Interesting I just learned that Maine has now been identified as one of the LEADERS in the growth of artisan cheesemakers (just behind New York believe it or not) and as having the MOST artisan cheese makers per capita of any state. These statistics, pulled together by VIAC (I’m attempting to get the official data), impressed many at ACS and in other Guilds and so everyone was especially interested in how our Guild works. It sounded like the major hurdles for other Guilds were a suspicion of competitors, and/or a lack of time/energy to organize properly. New York State had a good Guild as well but mentioned that the size of their state was the biggest challenge, so they were thinking about splitting into geographic guild chapters because there did seem to be pockets where there were a lot of members separated by significant distances.

The participants I heard from were: 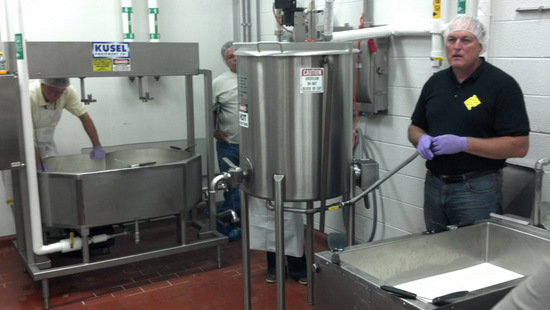 Unfortunately I had to leave before I could hear from everyone because I had signed up to make Havarti Cheese which, since I make a Gouda style I’ve always wondered how this even higher moisture cheese was made. Dave Potter from DCI was the teacher, and we were bussed over to NC State University’s dairy labs for the session, which was MUCH better than last year in Montreal where we tried to make cheese in buckets in an over air conditioned ball room with horrible squeeks and groans from wrapping competition cheeses for the cheese sale was going on in the other half of the space. It turns out that Dave also teaches the short courses that NCSU holds on farmstead cheese making, so this was familiar territory for him. 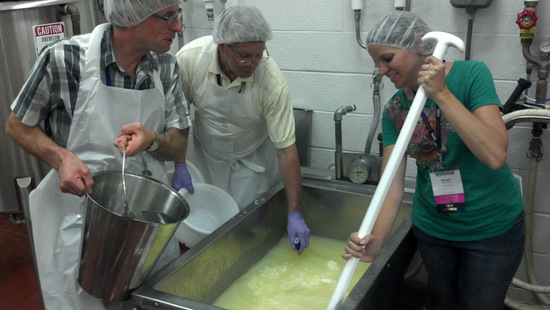 The most interesting thing to learn about making Havarti was the mix of cultures necessary that will produce lots of CO2 (which I knew) to make the holes, and then lots of diacetyl (which I didn’t know, but now makes sense). He recommended some of the ProBat series, the CHN series, or Flor Danica, though he recommended making a bulk culture out of freeze dried FD because the freeze dried culture was about 10 times weaker when it’s manufactured than the other types of cultures, so it needed a boost to be equivalent. Dave also used calf rennet for this recipe, which is something I’ve been trying out with very good results this year.

So this is a washed curd cheese where, after about 20 minutes of stirring) you replace a third of the whey with 150 degree water, then stir another 20 minutes or so until the curd begins to really stick together, after which you hoop the curds and then turn OVER the molds so they sit on the followers and the weight of the curd provides the pressure. Once the wheels have been flipped several times and is well bound together the wheels are often soaked in acidified cold water to rapidly cool the wheels and stop culture activity. Then the cheese is either vacuum packed, or waxed to age for 45 to 60 days before eating, though he pointed out that it very much could become a washed rind cheese as well. It should be holey, high fat, high moisture, very mild and meltable. Dave actually called it “party cheese” because if you bring it to a party then will appeal to everyone. 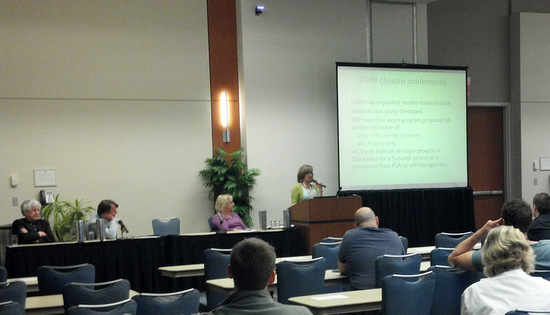 After lunch I attended the session on the ACS Certified Cheese Professional exam that was offered for the FIRST TIME at the Raleigh conference. Although it took the ACS five years to pull together (beginning with a kick-off meeting at the 2007 conference in Burlington, VT) it has come to fruition and they describe being overwhelmed by the positive reaction and how rapidly the registration for this year’s exam filled up (six weeks before the cut-off date); there are already people registered for the 2013 exam at the Madison, WI conference.

–It was designed to measure the cheese professional’s basic competency in working with cheese post-production (it is NOT A CHEESE MAKERS EXAM).

–There is nothing like this exam in the world, as is demonstrated by a host of international sponsors who have helped pay for the development of this exam.

–They are planning to expand to three exams offered every year beginning in 2014.