Friday began with an early morning meeting among the different Cheese Guilds to talk about the work that the Guilds do and where the Guilds and ACS can help each other. I was very disappointed with the discussion last year and had heard that this year the ACS Board had identified that defining and strengthening the connection between the regional Guilds and the national organization was a priority. One of the newest members on the Board (Vern Caldwell from the Oregon Cheese Guild) had tasked himself the job of coordinating this effort.

After introductions (in which there were quite a few announcements of brand new or fairly new Guilds being formed in Washington State, the Rocky Mountains, and Pennsylvania) ACS Executive Director Nora Weiser explained that ACS wanted to be careful not to overreach in their relationship with the Guilds to make sure the Guilds did not feel manipulated by ACS. Unfortunately she could stay for only 30 minutes of the long-scheduled one hour meeting in which many of the Guilds asked for MORE collaboration with ACS, especially in a way that would help justify the $199 annual individual membership cost for cheese makers in the Guilds.

Kate Arding and Marianne Smukowski, both Guild Board members and chairs of the Regulatory and Academic committee, announced that the Best Practices manual that ACS was about to publish might go a long way toward offering Guild members a reason to maintain a regular connection with ACS outside of the Conference and Competition. They offered to send an ACS Board member out to upcoming Guild meetings to walk through the document and explain why they put it together and how they envision it would be used.

I made the suggestion that ACS create a Guild Group membership category where, in exchange for a nominal annual fee, Guild members would have access to ACS information, and then ACS would have a Guild contact that would facilitate conversations between Guild members (working with individual cheese makers) and the work that’s being done at the national level. Kate, Marianne, Vern had no response to that suggestion.

Barbara Hanley, representing the Massachusetts Guild, illustrated an example of where she thought ACS could add value to membership for Guild members: bulk purchase arrangements similar to their existing shipping program. She thought a discounted lab service would be very useful, but that when she asked about this possibility last year no one from ACS got back to her. She sad that the MA Guild had already set up their own bulk discount with a lab in Buffalo, NY. They had also set up a discount on HACCP consulting work for their members that many had taken advantage of and wondered whenter that would be possible to do at the ACS level?

The ACS board members did acknowledge that their communications with Guilds is a challenge for them. They did not offer any ideas for how they or the Guilds could work on improving that communication challenge beyond assigning Vern Caldwell for outreach. No one suggested ways in which ACS could foster communication between the Guilds themselves regarding sharing organizational information, even though Nora had used that as an illstration in her opening remarks of how ACS could help Guilds.

I’ve followed up with Vern to say that I’d like to follow-up on this group discussion with him, and that I will continue to work on these issues.

Dr. Susan Mayne, FDA Director of the Center for Food Safety and Nutrition addressed the conference after breakfast this morning. She had several announcements to make:

Overall Dr. Mayne’s message was: The FDA is working with the goal of preserving traditional [cheese making and food processing] practices.

During the question and answer period Dr. Mayne was specifically asked why the FDA was focusing on cheeses made with raw milk and not cheeses made with pasteurized milk as well, specifically in regard to their 2014 surveillance sampling program for the presense of L.m. in raw milk cheese. Dr. Mayne admitted that without the parallel testing of the presense of L.m. in pasteurzed milk cheeses, the 2014 findings could not be used to specifically characterize raw milk cheeses as a higher or lower risk for the presense of L.m.. She did note that sampling was done in two stages, and that most (if not all?) of the positive tests came from the first round of testing, indicating (to her) that cheese makers became more focused on the risks of product contamination and acted to reduce those risks over the course of the study. 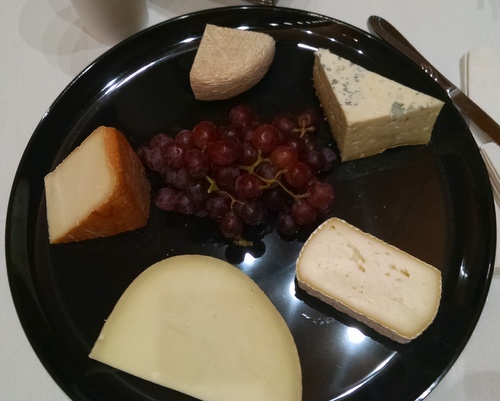 My first session of the day was “Quattro Portoni: Water Bufala in Northern Italy” which was a profile of a single dairy raising Water Buffalo in the north of Italy (most Italian Water Buffalo dairies are in the south) and making much more than Mozzarela with the milk they produce.

We met Bruno Gritti, one of the owners and founders of this Bufala creamery, and he walked through his families initial foray into a cow dairy whereby they were challenged with Italian quotas and pricing that were not favorable for their economic survival. Instead, in 2000, they introduced Water Buffalo into their dairy operation and now they have transitioned completely over to them, currently milking 250 Bufala cows along side 100 non-dairy animals, 300 Bufala heifers, and 170 Bufala steers.

Quattro Portoni refers to the four gates of the ancient moat-encircled town of Cologno al Serio in the province of Bergamo, and Mr. Gritti has named several cheeses after the names of those gates. He makes Quatrello di Bufala (a washed rind cheese similar to Teleggio), Caciocavallo di Bufala (an aged pasta filata); Moringhello di Bufala (a small hard aged cheese); Casatica di Bufala (a bloomy rind); and Blu di Bufala (a blue cheese made in Teleggio molds which is Mr. Gritti’s favorite cheese, but the most difficult for him to make). We tasted all of these cheeses, and many of them had a hint of bosky Bufala in their flavors, beyond the dense richness you would expect. Only the Quatrello had a sharp and forward flavor that lept out from that rich background, and I enjoyed that the most.

It may be obvious, but a Water Buffalo gives less milk (an average of 6 to 9 liters a day) than a typical dairy cow, but that their milk is much richer. The milk will yield up to 25% of its weight in cheese. The animals are native to Asia but have been in Italy since the early Roman period and is traditionally used for pasta filata types of cheese, specifically the world famous Mozzarella di Bufala Traditionale. Mr. Gritti decided that he wanted to explore other cheese varieties with his milk, and says that any cheese type can be made with Bufala milk as long as the cheese maker is willing to adjust to its unique characteristics. One of his challenges is that the protein creates a very tight curd that is slow to give up its whey, so there is typically very little whey in the cheese vat.

THE SCIENCE OF CHEESE MAKING

…there is SO much here to digest. It will take me a while to summarize as accurately as I can. Lots of good news but some disappointing news as well: basically it has been *scientifically proven* that the FDA doesn’t know what it’s talking about when they talk about food safety in cheese making.

ACS chose to host their 2015 Cheese Judging and Competition and a beautifully restored theater known locally as “The Vets” with red acres of red velvet curtains and drapes and a landscape of plaster work and gold leaf decoration. It made an appropriate setting for the news that would be delivered: 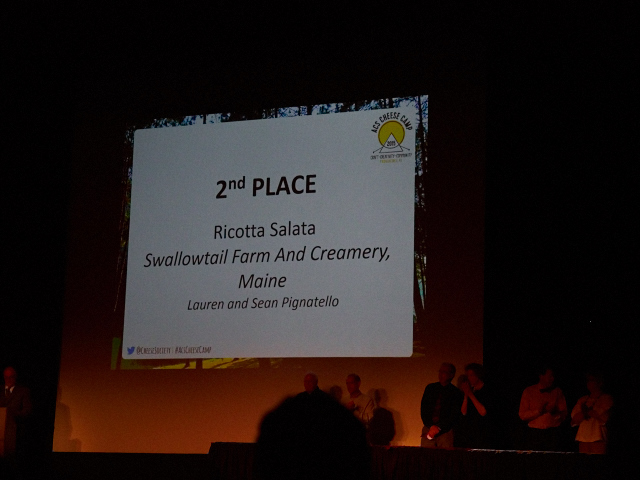 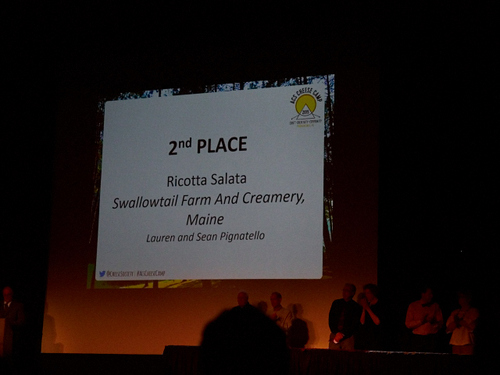 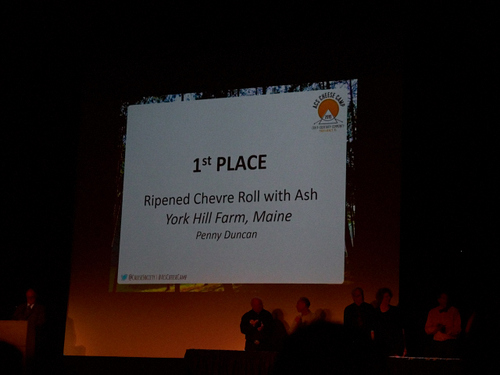 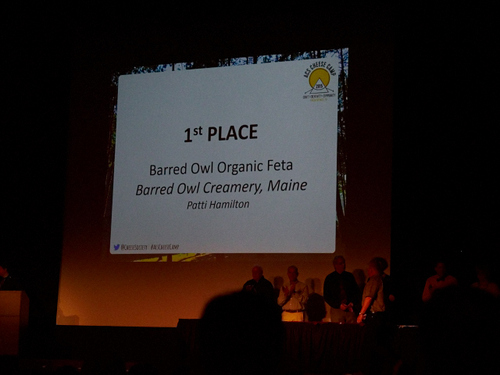 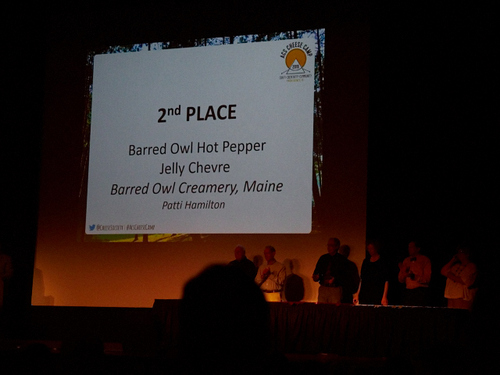 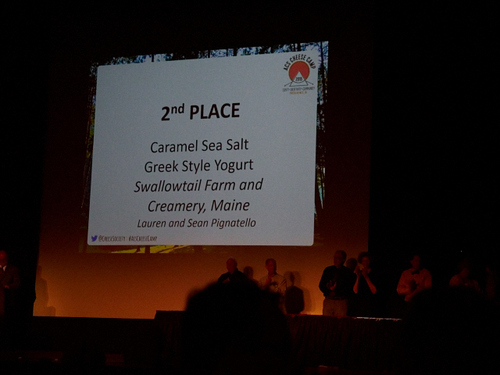 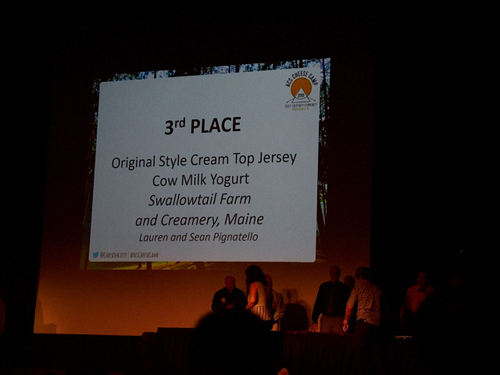 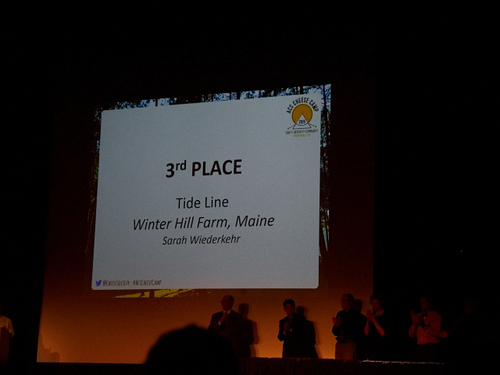 And unfortunately, due to the excitement in the row of Maine cheesemakers at the Vet, we didn’t get pictures of Caitlin Hunter (Appleton Creamery, far left below) for her Marinated Chevre, and for Jesse Dowling (Fuzzy Udder, near right below) for her Sheep Milk Yogurt. Congratulations to all! 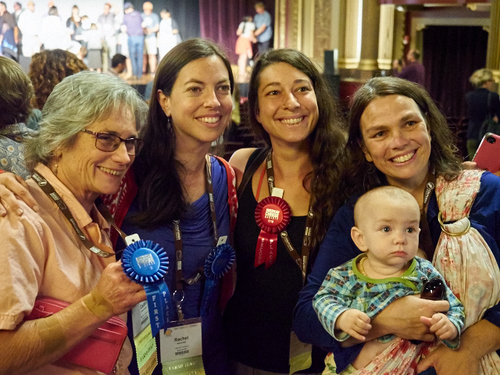