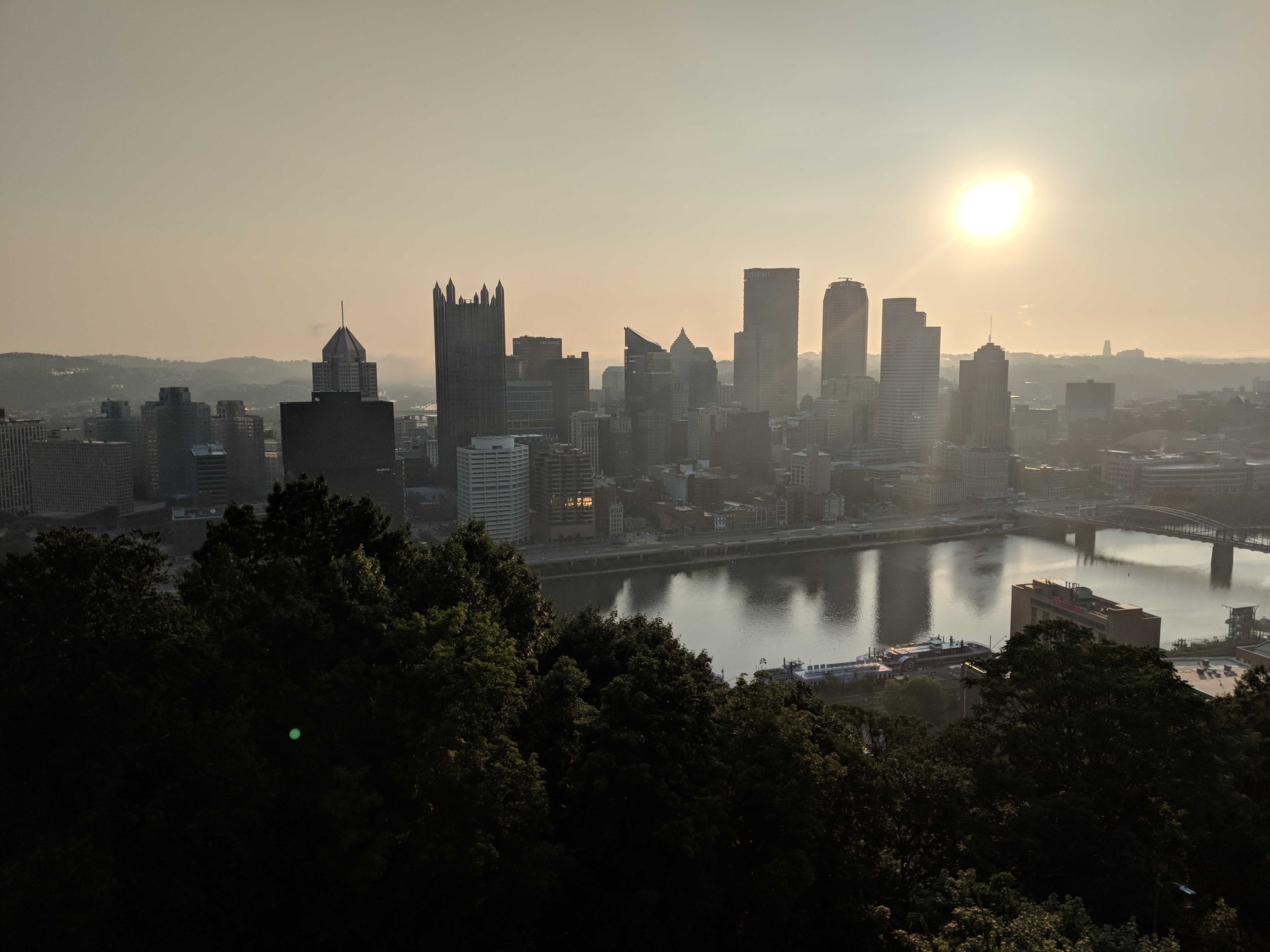 We have arrived and are looking forward to learning. First up the Vermont Pancake Breakfast (really good bacon!) followed by the keynote: Ignite Your Goals, by Gary O’Brion. 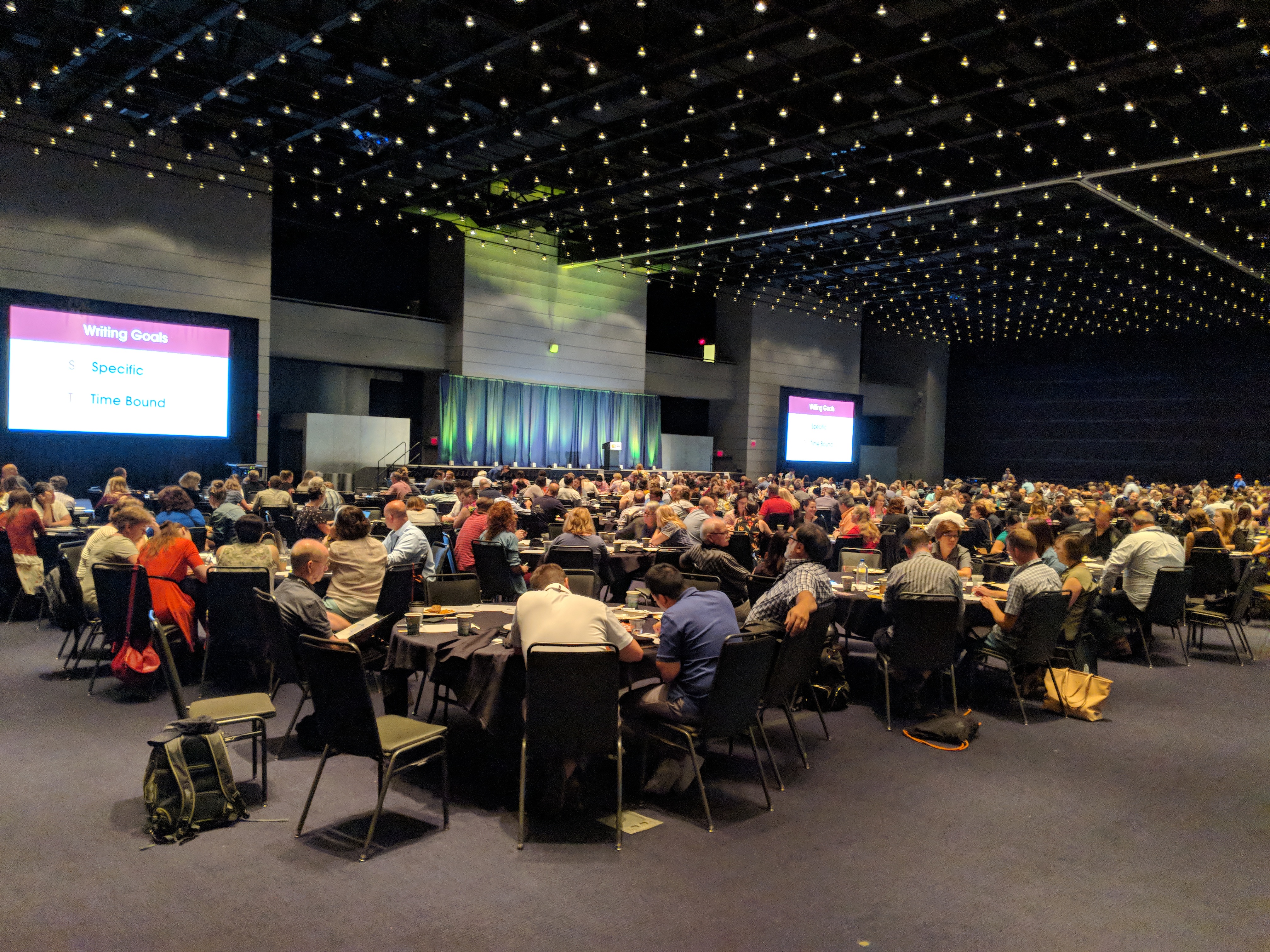 Next up for me: Affinage — Under the Microscope

Cheese is and (if we’re careful) will always be a mystery of many influences and factors: some our making, some from our dairy animals, some from our environment. A long time ago(!?) Michael Chabon published a novel called The Mysteries of Pittsburgh in which he explored sexual fluidity among a small group of friends and described how dynamic and disruptive this could be to the group. And in a weird totally unintentional way this first session at this particular ACS conference session could also be titled: The Mysteries of Pittsburgh: what we know influences our cheese, what we know we don’t know, and when we have to strip away the mystery because it’s affecting our bottom line.

This session is the actually the culmination of many past ACS sessions and others I’ve attended that have reported on the exploding new world of specific scientific research devoted to the mysteries of cheese. This research has proven what all cheese makers knew: coagulating milk then adding salt to the curds is an incredibly difficult and complex process, even if the endpoint is a “simple” fresh cheese, let alone a years-old washed rind Comté wheel.

In this session three people on the front-line of both the research (Dr. Wolfe) and the practical application of the expanding knowledgebase (Mr. Lekkas and Mr. Meredith) fill in some more of the blanks. Realistically most cheese makers will not be creating and funding full microbiology laboratories as JHF (producer and distributor) and NYD (distributor and producer). However, with an audience composed of members of the cheese industry the intention appeared to let us know what is possible and why it is important to understand some of the basic concepts behind this work, and how that might benefit all of us in the areas of cheese quality and safety.

First Dr. Wolfe presented an example of how, during his research into complex microbial communities, he has been able to apply his techniques to solve a question for a specific cheese problem: purple cheese rinds that smelled like fish. In order to solve this mystery he began by studying the complex microbiology of a “normal” or “baseline” standard of this cheese. Only after he understood this could he begin to move to studying the mysterious purple rinded cheese. Apparently this is a basic scientific technique based on Koch’s Postulates.

In the example he presented, among the many “baseline” bacteria, yeast, and fungus on the purple cheese, he found a single additional bacteria called Proteus. Proteus had been (rarely) found on cheeses before there was never a reference of Proteus producing the purple color. However, after isolating the purple Proteus he found new genes that allowed the Proteus to metabolize certain amino acid in the cheese into indigo (yes, the blue dye!) and indirubin (another pigment). And when the cheesemaker eliminated the environment in which the Proteus thrived, the purple rind problem went away. The cheese maker, together with Dr. Wolfe, was also able to identify the source of the Proteus – the raw milk supply – and the single cow in the herd that was responsible for it, who was pulled off the milking line.

The next speaker was a microbiologist from the Jasper Hill Farm – Panos Lakkas – who described how he uses microbiology at Jasper Hill beginning with the tracking of pathogens out in the pastures, all the way through affinage and general sanitation on wood boards and work surfaces.

Lakkas began by encouraging all cheese makers (especially farmstead cheesemakers) to “Build an Index” of what is normally happening on the farm and in the cheese room. He recommends keeping a low tech Diary of Barn Practices that will be helpful at times when you are troubleshooting major issues (what changed and when?). Following up on that a cheese maker could begin regular testing of the milk for various organisms of interest. For example at JHF they regularly test for S. aureas because they know that there is a threshold below which, if present, it cannot affect the quality of the cheese. Similarly they use an E. coli specific test as a measurement of their sanitary practices. Using this they have already managed to get their epcc levels below three for most makes.

Lekkas pointed out that today many of these tests are available as specialty plate films that can be exposed and then incubated in a relatively in expensive piece of equipment, so the price of regular testing has come way down.

JHF also regularly tests the LAB levels of the milk they are processing into raw milk cheese, and this has helped them enormously in avoiding over-acidification of curds because high-LAB milk will require fewer added cultures to achieve the desired pH curve for a cheese.

Lekkas also showed an example of an advanced use of microbiology for product development by isolating native bacteria and then, mixing some of those isolates depending on their characteristics. In this case his lab was attempting to make a cheese culture that would add high-Sulphur “cooked cabbage”odors and flavors to a cheese using a mix of previously isolated native bacteria.

For more information on the kinds of testing available for raw milk Lekkas referred us to the Cornell “Raw Milk Testing” paper which summarizes it nicely.

The final speaker was Eric Meredith, a microbiologist working for Neals Yard Dairy, who wanted to give a straight-forward overview of the Scientific Method because he felt that any investigation into cheese problems should ideally be framed in this way: Purpose/Question, Research, Hypothesis, Test, Success or Failure, Conclusion, and Communication.

Meredith acknowledged that it was a lot of data to collect, and that it took time, but he assured us that when a problem was so severe that it required a formal scientific investigation, the cheese maker would already be way ahead of isolating the possible cause, and then creating a solution that would result in better safer cheese on a more consistent basis. 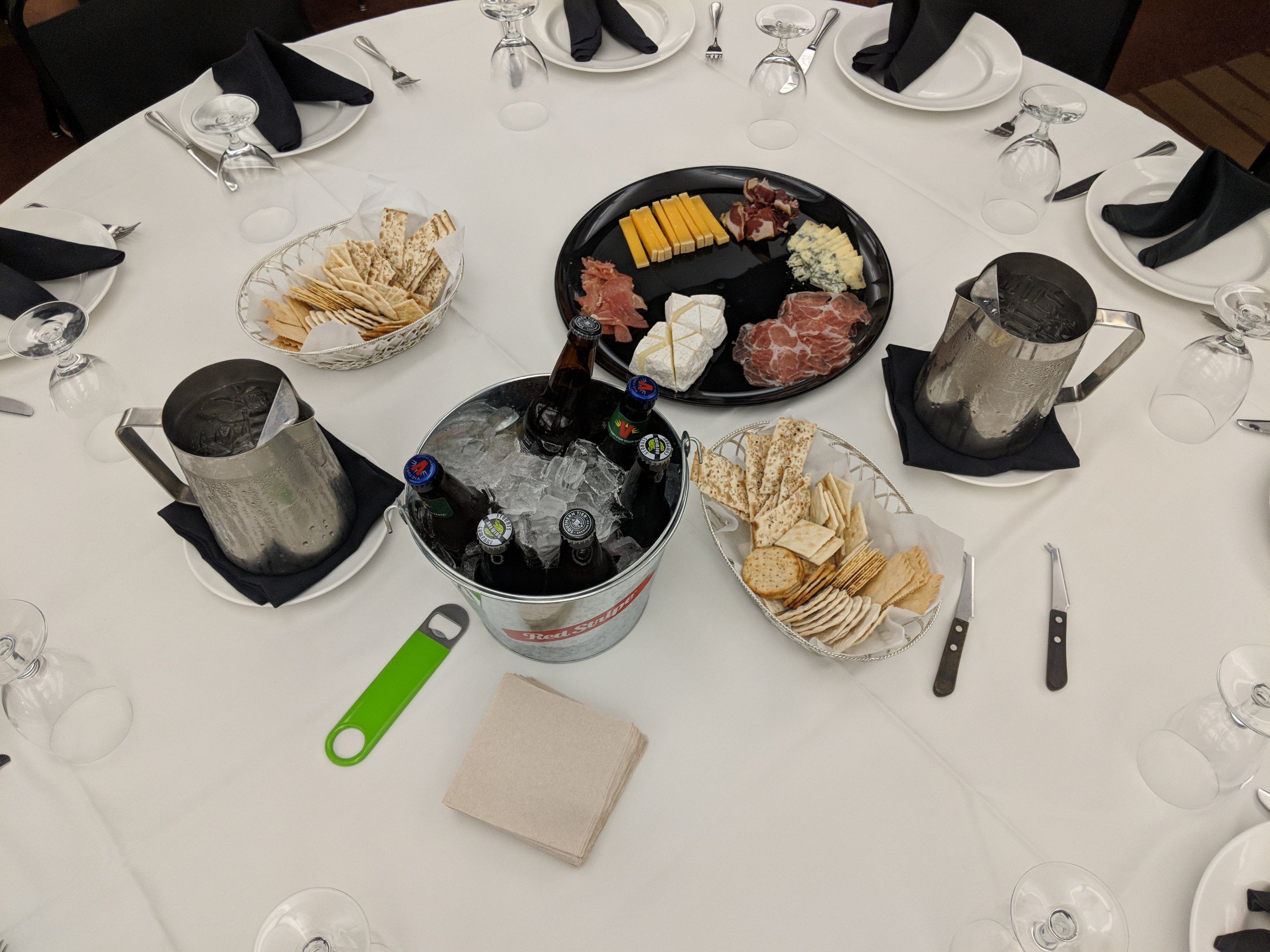 Jeffrey Roberts has been a great friend to artisan cheese makers all over the US, and all over the world. His work to highlight the outstanding quality of our local cheeses have (literally) put many of us “on the map” and helped us thrive in this industry. Recently, with the publication of his new book — Salted and Cured — Roberts has lent his voice to the Renaissance of Fermented foods. And there is no better place to celebrate this renaissance than at an ACS conference in a Tasting session!

Thus I found myself seated next to Heather Donahue at a table in the Pittsburgh convention center staring at an artfully arranged tray of cheeses and meats, alongside an ice bucket of beers. Of course these were not just any cold cuts, cheese cubes, and brewski’s. Roberts had invited a Pennsylvania brewer, as well as a Pennsylvania charcutiere to help him create three tastings mixing one of each into a greater sum, and then he invited a Certified Cheese Professional to help explain WHY these pairings worked, and help us make similar pairings for ourselves in the future.

First Roberts riffed on the modern history of artisan food that has now culminated in a once unimaginable statement: “We no longer need to travel to Europe to eat like a European!” He told us, extolling the current qualities of local/regional bread, wine, cheese, meats, beer, vegetables, etc…as good as anything else made in the world. He pointed to Fritz Maytag’s purchase and revitalization of Anchor Brewing Company. That was followed closely by the Judgement of Paris when American wines bested French wines according to French judges. In 1977 President Carter signed legislation recognizing home brewing of beer as legal. Soon after the ACS is formed to celebrate the creation of artisan cheese, and once local high quality cheese is available consumers demand local meats, pickles, etc.

Next up Bill Covaleski, of Victory Brewing, pointed out that it’s possible that some of the people in our session had grown up in a world where having a selection of local craft beers was ALWAYS available. He said that at the turn of the twentieth century there were 4,000 brewers in the US, by the 1980s only 80 of them remained. Now, at last count there were 6372 brewers in the US and growing every day. He estimated that the number is realistically 6,500 right now. And because of the diversity of brewers, beer in America was becoming more and more unique to the US and no longer seeking merely to copy the styles that had been found in Britain and Europe.

Rory Stamp echoed the notion of ‘American Originals’ developing in the cheese world as well, acknowledging that US cheese makers often use a European style as inspiration, but then are often adamant to add as many local and personal elements to the cheese as possible. That would be the case with the cheeses we tried today.

Ari Miller told the story of his fascination with cured meats, “riding the edge of spoilage” to create a diversity and intensity of flavor. He also reminded us that all of these fermented foods we were celebrating “are from our Grandparents’ cellars” because their initial role was simply to maintain nutrition for the long term, but ended up creating foods nothing like their original ingredients. 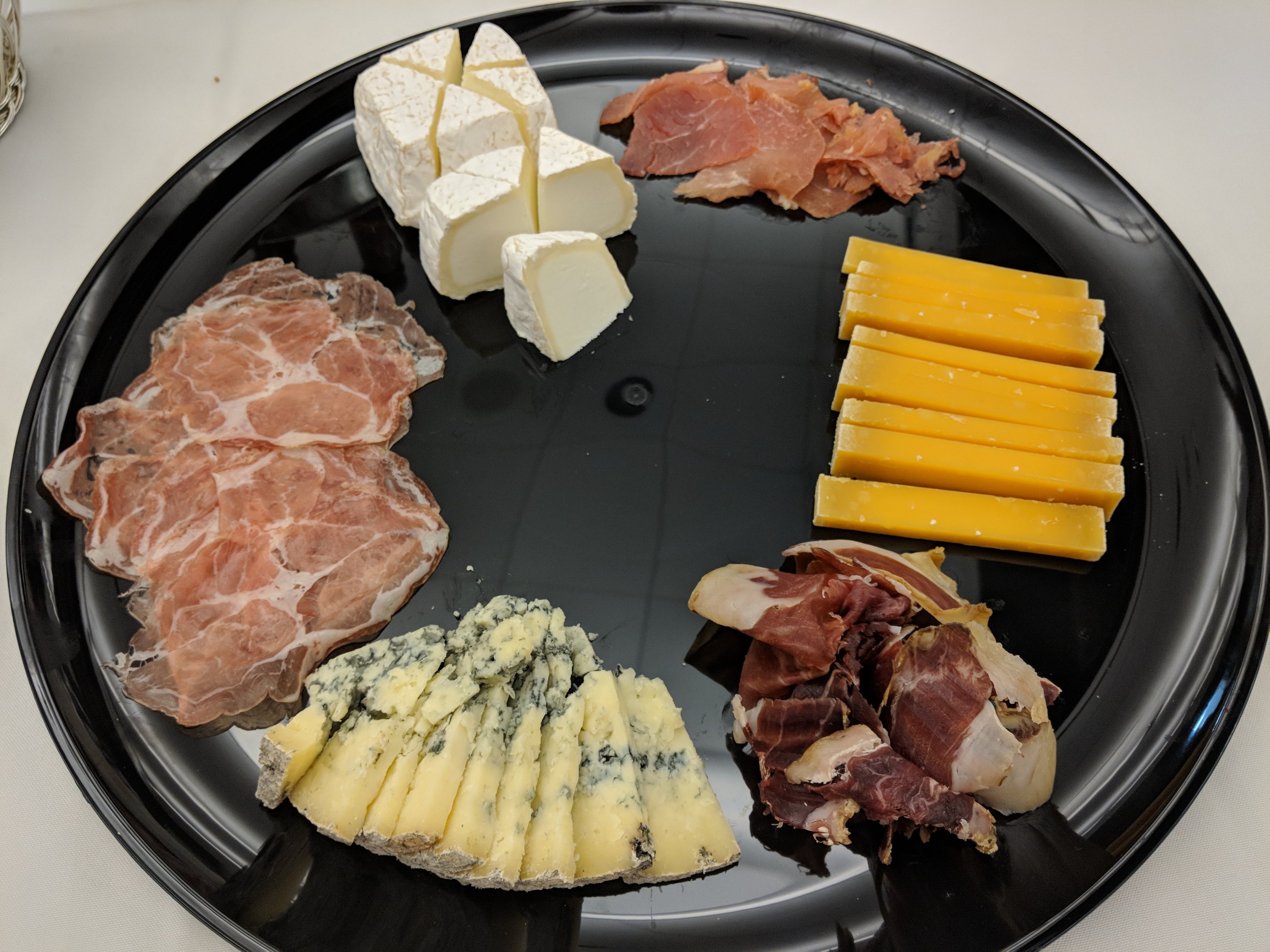 Our first triple tasting was of Prima Pils (Victory Brewing), a light colored but substantially flavored lager beer featuring three Germany hops and one Czech hops. The cheese was Chickabiddy (Goat Rodeo Farm) a perfectly aged goat cheese with clouds on its surface, a golden halo of a rind, and a perfectly smooth paste – not chalky, but not gooey, and even all the way through. The meat was Lachsschinken (Schaller & Weber), which means “salmon ham” in German. In this case it is a pork loin that has been salted and lightly smoked, then wrapped and tied in fat, and then aged so that the muscle breaks down into pale pink buttery slices, much like smoked salmon. The intense salt and light smoke on the meat paired perfectly with the crisp lager, and the rich buttery meat offset by the acidic goat cheese.

Our second tasting featured Nu Skool IPA (Southern Tier Brewing) with a complex and cutting edge mix of newer hops varieties lending this amber ale the distinctive IPA bitter bite. For cheese there were matchsticks of a perfectly nutty creamy mash-up of aged Gouda and an alpine cheese called St. Malachi Reserve (The Farm at Doe Run). And the meat were thick dark flakes of Miller’s flagship Lamb Prosciutto (1732 Meats), deeply funky and although calling out for red wine to be paired with, the IPA hops and the nut-bomb of a cheese were more than a match for the gamey lamb.

The last tasting started with Fat Dog Stout (Stoudts Brewery), a very malt-driven dark beer with only the faintest hoppy pinch. The cheese was Birchrun Blue (Birchrun Hills Farms), a lighter less acidic blue that had what Stamp referred to a s a ”fudgy decadence” to it. Next to that was a slice of Secca Coppa (Parma Sausage Products) so thin that you could read the ACS Conference Guide right through it. The Stout and the blue cheese both brought a meaty sweetness while the Coppa countered with salt and the slight sour of perfectly fermented meat.

It was a nice way to end the first day at the conference.