I have always avoided the pre-conference tours offered by the American Cheese Society, probably simply to save me the cost of the extra night in a hotel necessary to take advantage of it. However this year I would be traveling to a City (San Francisco) where I have family to bunk with AND the tour would also double as cheap transportation to the destination city (Sacramento), so I had no real reason to poo-poo the opportunity. I signed up for the “Farmstead Life: Sheep, Cow, and Goat” tour, and I’m glad I did.

FIRST of all, it required me to commute to the pick-up location by ferry from Alameda (in the East Bay) to the SF Ferry Terminal building on the first ferry of the morning. It was overcast but not foggy when the ferry pulled away from the Main Street Ferry Terminal on Alameda and wended its way through the busy container port channel along side Oakland’s waterfront. Aside from the intriguing visual of how much of the consumer products arrive in the US, the utilitarian industrial landscape was breathtaking, as much as the approach to downtown San Francisco directly under the Bay Bridge.

The commuter ferry landed at the SF Ferry Terminal Building which is much more famous for becoming a Foodie Heaven, host to many amazing food purveyors as well as hosting the best known San Francisco farmers market. I got there in time to grab a large Peet’s Coffee and find a bank machine before we piled into our bus (three different ACS tours started at the Ferry Terminal Bldg that morning) and headed north over the Golden Gate Bridge and into the Marin County dairy land hard by the Pacific ocean.

Our first stop was at a sheep creamery called Barinaga Ranch run by Marcia Baranaga (descended from Basque immigrants) who manages a closed herd of Frisian and Katahdin mix sheep (the Katahdins add genetic heartiness into the American Frisian dairy breed) whose milk creates Spanish Basque style cheeses that she sells in Marin Co. and San Francisco. The farmland, which has a long history of supporting sheep herds — often managed by Basque immigrants — was previously a played-out cow dairy farm that overlooked Tomales Bay and Point Reyes National Seashore. It’s a stark and stunning landscape full of challenges, beginning with poor fertility, but also including significant predator pressure from coyotes and mountain lions. The fertility is being slowly improved while paying close attention to its effects on local water quality, especially as Tomales Bay is home to some world-famous oyster farms. The predators are kept in check by two giant Great Pyrennes dogs who live their entire lives with the flocks. 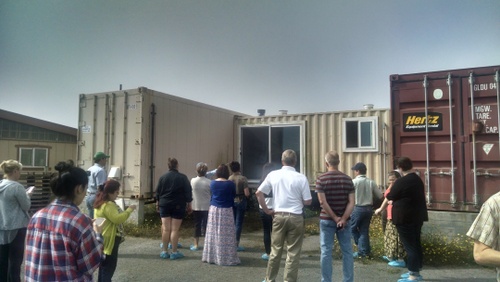 Besides the beautiful setting of her pastures, Marcia built her cheese rooms out of used shipping containers(!), and it’s in these rooms that she produces a small round (“Txici” prounounced “cheeky” in the Basque language) aged 3 months, and the larger “Baserri” aged 6 months. Both have that extraordinary sheep-y buttery richness, along with a distinctive salty tang that must come from the ocean fog that regularly blankets her pastures.

Our tour guide on the bus was Lynn Stray, a member of the Giacomini family that has run a dairy farm in Point Reyes Station for over 50 years. The family members of her generation have been busy transitioning their dairy farm into the Point Reyes Farmstead Cheese Co. — FAMOUS for it’s blue cheese — as well as into The Fork, a culinary destination for people interested in learning more about how food is made and tasty ways to prepare it.

The dairy remains much the same as it has been for it’s history — around 350 Holstein cows living and grazing in the alternately green and brown Marin hills. These days instead of sending their milk to San Francisco in bottles, they are making almost all of it into cheese, now including two types of blue cheese, a Tomme style wheel, and fresh mozzarella. In addition the family has gone to extraordinary lengths to cycle all of their nutrients, and re-cycle as much water as is possible given the increasingly dry climate they are experiencing. All of the waste matter produced at the farm is meticulously channeled into either a methane digester (which ends up powering at least 70% of the farm, and heating all of its hot water), or composted with local harvest cast-offs into premium bagged soil amendments for sale to area gardeners, or to bulk compost that increases their own pasture fertility. Not only do these efforts help avoid nutrient run-off into the nearby bay, but it saves them a lot of money in energy and amendments, as well as helping ward off threats from drought periods.

Their cheeses, which have already won multiple ACS awards through the years, have been expanding in variety even if they can’t actually increase their milk suppy which has been running at capacity for many years. They have added a very different, mellower blue called “Bay Blue” that exhibits the pleasant sweetness that is often found in sheep milk blues like Roquefort. They’ve also been aging a natural rind “Toma” that is much more of a smooth and creamy washed-rind style Gouda, though it has a more crumbly interior. Their Original Blue is as sharp and tangy as ever, but it still melts on your tongue like a spoon of creme fraiche.

“What kind of goats do you raise?” Someone from our tour group asked Tamara Hicks, the owner (along with David Jablons) of Toluma Farms and Tomales Farmstead Creamery.

“We have all six,” she answered and pointed to the steep side of a typical Marin swelling hill where various colors, sizes, and personalities of goats grazed and played.

It has been a long road — 12 years — leading up to this stage of their farm where they are now turning the pastures they have worked hard to bring back to productivity into goat and sheep milk cheeses that they have begun to sell in Marin and San Francisco. They are still experimenting with the right mix of process and products (milk twice a day? or once? Focus on cheese and produce alone? Or add farm-to-table events?) but they are making wonderful straight-forward cheeses already. We tasted their drained goats-milk squares — three day old Liwa, bloomy Kenne, and hard washed-rind Assa — the names a tribute to the local Miwak tribes that fished oysters out of Tomales Bay for thousands of years.