It is HOT in Sacramento in the summer, especially when compared to Maine temperatures. Yesterday the temperatures were in the 100s in the Central Valley of California that includes Sacramento at its northern end. It’s true that it’s a “dry” heat, but 100, wet or dry, is still very hot. As I walked to dinner in the twilight of the day the residual heat in the pavement practically rang from sidewalks after baking through the day. 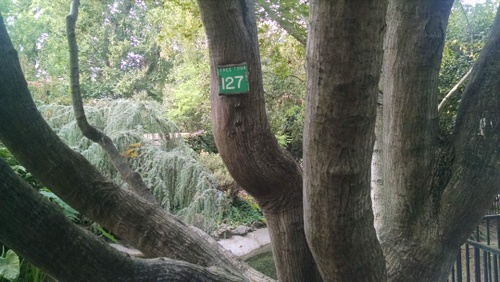 Wednesday broke clear and a bit cooler (78 degrees). I walked across the Capitol park on my way to breakfast at the convention and noticed that almost every tree is labeled with its species and common name, with a few of them numbered and referring to a Capitol tree tour which I will have to look into.

The keynote speakers of Darrell Corti and Narsai David reminded the attendees about how far America has come in valuing traditional handmade foods — including cheeses — using the history of the “California Cuisine” movement of the 1970s as a lens. David spoke about his grandmother who grew up in a mud-brick village in rural Iran who made traditional dishes out of whatever was fresh and available that day. Her ancient “what’s on hand” cuisine was the same as these food “pioneers” who were simply bringing us back to valuing what is fresh and what is local. He made the point that these chefs did not pretend to be inventing something new, it was the media who picked up something that was unfamiliar because conventional food processing had moved so far away from “fresh and local” and so they called it “new.”

My first session was titled “Do You Know ‘GMO’?” in which a UC Davis scientist tried to make the case for using genetic engineering to improve our food production capabilities, and Albert Strauss of Strauss Family Creamery (in Marshall, CA) made the case for why he made the effort to test all of his grain for GMO contamination so that he can tell his customers that his milk and dairy products are made without any GMOs.

There are many legitimate discussions to be had around this topic, especially when it comes to dairy products. For instance: many people don’t want to directly eat plants that have had their genes manipulated, but if a cow eats GMO corn, is that the same thing? Chymosin (rennin) is produced by E. coli that have had the gene for making the same rennet protein found in calf stomachs spliced into them so that they will produce an abundance of the rennin molecule (identical to the method for making many modern drugs) — since the E. coli organisms are removed before the rennin is added to rennet, and the molecule is identical to calf rennin, is this really a GMO issue? I think many cheese makers (and cheese consumers) would like to have this discussion.

Unfortunately Dr. Kent Bradford from the University of California at Davis Seed Biotechnology Center decided to treat his audience like idiots and began his talk by assuring us that humans have been manipulating genes just like genetic engineering (GE) for millennia: “The original biotechnology is plant breeding.” He went on to show the evolution of the modern corn crop compared to the primitive Teosinte found in Mexico, and then the size of 8 week old meat chickens in 1959 compared to 2014. These were examples of the older kind of “biotechnology” where you can’t insert genes by any means other than sexual reproduction. He also used tree grafting(!) as an example of trans-species means of genetic manipulation, even though the genetic component of the tree cells are never changed…

He continued his lecture alternating between placid assurances (“Is GE safe? YES.” “Bt is produced in GE corn at a very low level…” “GE varieties will reduce pesticide/herbicide use”) and alarmist threats (“The cost of tracking GE crops through the supply chain costs too much” “The FDA and courts have ruled that the desire to know what is in our food is not sufficient to require mandatory labeling” “in the future we will need a way to feed over 9 billion people on the same amount of land and GE is the only way to do this”).

The first question put to Dr. Bradford by the audience after the presentations is whether the gene for producing B.t. could have ever been bred into corn or any other plant crop using traditional plant breeding. “Well, technically I think you caught me there…” he admitted. Then he explained that we all contain traces of primitive genes going back through evolution, so it’s not *entirely* impossible…but the beauty of GE is we can do it quickly!!! It was pointed out that if he felt the need to begin his talk with an acknowledged False Equivalency, what does that say about the rest of his talk?

Albert Strauss presented his experience as a food producer and marketer by pointing out that his customers WANT non-GMO products, and he believed that the cost to provide that to them was worth it to his business, and that the customers would pay for it (directly contradicting several of Dr. Bradford’s alarmist threats). He explained how much the testing cost, and how the testing was conducted on his farm, and then left it at that.

The tenor of the questions at the end of the discussion were not sympathetic to the GE defense. One audience member commented: “It’s not that we don’t believe in science as a foundation in improving our agricultural and food processing technology. However our relationship to GE biotechnology comes through a chemical company that manufactures poison.”

I’m not sure what we actually learned by this exercise, except that Mr. Strauss is committed to producing his products free of any GMOs, and that his customers support him by paying the necessary price for those products.

Unfortunately for the group in that room, the GMO presenation was followed by our lunch meeting featuring a speech by Mike Taylor, Deputy Commissioner for Foods and Veterinary Medicine at the FDA who would be ‘splaining his agency’s recent Foot-In-Mouth PR debacle around aging cheese on wood. He had met privately with the ACS Board who had gone over, in detail, how that incident rubbed many cheese makers the wrong way, and to find out how it might have been better handled.

Overall Mr. Taylor was suitably chastened and said all the right things to reassure his audience that they ‘get it’:
“We at the FDA need to get better at [collaboration] and engaging with this industry.”
“We need to learn more [about aging cheese on wood]!”
“We do NOT have a policy banning wooden shelves.”

He also acknowledged that it would benefit their process to regularly check-in with the artisan cheese industry through meetings with ACS: “We do find that would be helpful…we are ALL IN on the idea of collaboration…hold our feet to the fire!”

Regarding raw milk cheese, although he acknowledged that the FDA has a strong “concern about fluid raw milk…we do know that raw milk cheese is and can be produced safely…it’s here today and it will always be here.”

Taylor also touched on the progress towards implementing the new Food Safety and Modernization Act (FSMA), finally illuminating some of the timelines that their working working with: the FSMA Rules should be completed by late 2015; the expectation, after the final series of public hearings on the Rules, would be that they would be implemented by late 2016. [I plan to attend a “FSMA Updates” session on Thursday morning and will report on that.]

THE MICRO-BIOLOGY OF CHEESE RINDS

The pay-off for slogging through two tough subjects this morning was to FINALLY get a follow-up to one of my favorite presentations of all time with Dr. Rachel Dutton and Dr. Ben Wolfe who (together with Sister Noella aka “The Cheese Nun”) shined a light in to the mysterious but critical world (to cheese makers) of cheese rind biology back at the Montreal conference in 2011. As it is they are at the end of their work being done at the FAS Center for Systems Biology at Harvard University. Wolfe will transition to a lab at Tufts University beginning in 2015, and after 2015 Dutton will be moving on as well.

Back in 2011 Dutton and Wolfe had only three ‘lonely’ bar graphs to show to us demonstrating the bacteriological and fungal diversity on the rinds of three different kinds of cheeses: natural rind, bloomy rind, and washed rind. Since then they have kept those three main categories and now have analyzed 362 wheels of 137 different cheeses from 10 different countries (largely in North America and Europe) made from cow, sheep, and/or goat milks, raw and pasteurized. Besides studying the rind microbiology they measured the pH, salt, and moisture content of each wheel.

The result is now a kalidascope of colored bar charts that I tried to photograph when they put up the slide, but luckily they also have published much clearer images on a new web site put together by Wolfe called MicrobialFoods.org, together with lots of other interesting science about fermented foods.

The first thing I should point out is that in the world of Fungi Science the cheese maker’s friend Geotrichum candidum has been renamed to Galactomyces geotrichum. Beyond that there ought to be some familiar bacteria and fungi for cheese makers on that list, as well as many unfamiliar critters. Overall the bloomy rinds seemed to be dominated by Gc, some Penicillium fungi, as well as Pseudomonuns and Hafnia bacteria. The natural rinds are dominated by Staphylococcus, Actinobacterium, and Brevibacterium which is something of a surprise. Even more surprising, Brevibacterium was generally not found on washed rind cheeses!

The big take-away? Moisture content is the major driver of microbial diversity on cheese rinds. Another, possibly disappointing, finding was that geographic location did NOT appear to be a factor in microbial community correlation between cheeses…however this study did not look at strains and sub-strains of these microbes, and there still could be a geographic component among strains that allow for regional similarities.

All in all I have written down six pages of notes from this session and would LOVE to fill anyone in on any details they might be interested in. However our best move as a Guild will be to invite Dr. Wolfe back up to Maine for another presentation before the Guild.