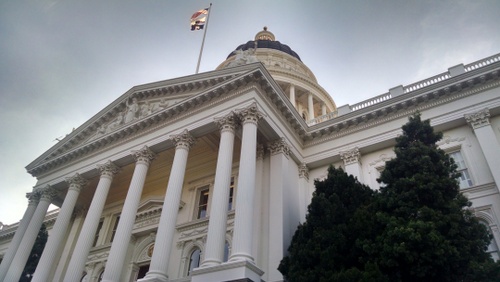 The morning began with an early morning meeting with the other Cheese Guilds attending the conference. The idea was to talk about ways in which the Guilds could collaborate, and any ways the Guilds could better interface with ACS. Unfortunately it was run as an afterthought, and despite raising many valid areas that the Guilds would like to address (workshop sharing, Guild formation, Guild legal structures) the meeting was stopped five minutes before it was scheduled to end with absolutely no promise of follow-up besides circulating a typed list of attendees and their emails. I later complained to the President of the ACS board about this “lame” attempt to help the Guilds by getting us together. He said he would look into it sometime after August. 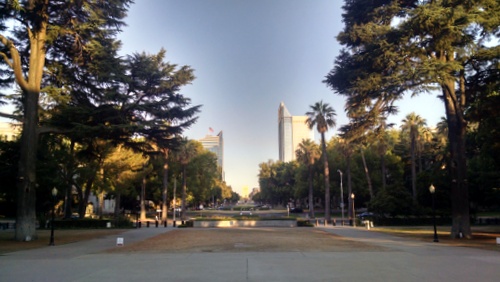 We then headed to the main hall where we had been eating our meals for a general session about how the shellfish industry manages the traceability and HACCP requirements they have been working under for about ten years now. These are all areas that will soon be applied to the cheese industry after the FSMA is fully implemented over the next few years. The first person to speak was Maryanne Guichard from the Washington State Dept. of Health who explained how the system worked, and that all states participating in the traceability program got together on a regular basis (annual or biannual) to evaluate what was working and what was not working and propose changes to the system. Interestingly she explained that the FDA was a member of that working group and had only a single vote on proposed changes or new guidelines. They could, if the group approved something, still veto it (as the ultimate regulator). But they would have at least participated in the development and discussions of the issue as a partner, instead of being presented something from out of left field. 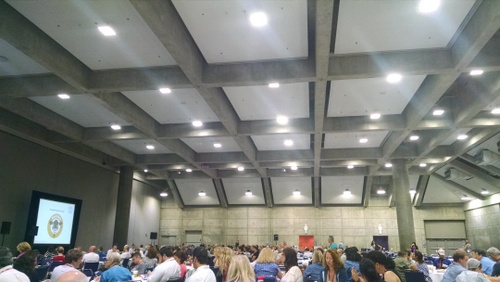 Then Micheal Antee, an FDA officer who has regulated the shellfish program spoke about the process from the regulator’s perspective. He stated straight-away that “regulation cannot work on its own — there has to be industry buy-in.” This echoed the ‘realization’ that FDA Deputy Michael Taylor spoke to when he addressed the general assembly of cheese makers on Wednesday, and it was nice to hear that another wing of their regulatory apparatus has learned that engaging with the industry they regulate is a “best practice.”

The Terry Sawyer, owner of Hog Island Oyster Company, spoke from the producer’s perspective
about the regulatory process. He ecooed the idea that effective regulation requires collaboration He also wanted to point out that the traceability requirements were often a MARKETING opportunity for producers trying to build a brand. One of the lynch-pin documents in traceability of shellfish is paper tags on every bag of shelfish they sell that follow the shellfish around until the bag is opened at the retailer or restaurant, at which case they must be filed and kept for at least 90 days. His company prints custom tags that have all the standard fields on it PLUS a large company name and logo in bright blue. That would certainly make the bags of Hog Island oysters stand out from others in a pallet or pile… By proactively communicating to customers about how Hog Island values the traceability of their oysters he feels that inspires confidence in their brand vs other companies that may not want to talk about a potential recall of their product. 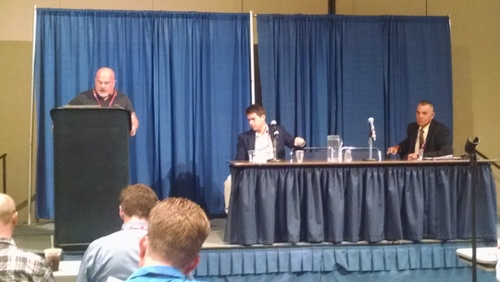 The discussion of traceability was a perfect segue to my next session delivering updates on the Food Safety and Modernization Act (FSMA) which has been “culturing” at the federal level for at least five years, and is entering the final stretch of wrapping up the comment periods, forming the final rules, and then implementing them. Craig Detlefsen from the International Dairy Foods Association and Dr. Dennis D’Amico from the University of Connecticut were kind enough to bring us all up to speed.

I won’t bore you with all the details I learned, though I may prepare a mini-seminar at some Guild meeting to go over the fine points. I will, instead, list the Big Takeaways:

Whew. I have five written-out pages of notes, plus some Powerpoint handouts covering everything I could absorb through this session. All of it is informative, but most of it will cause eyes to glaze, roll, and close if stared at too long. Never-the-less you should now understand that we will be operating in an entirely new food saftey regulatory world in at least four years; the countdown has begun.

The lunch on Thursday included a “Town Hall Forum” where ACS members could comment on the presentation the previous day by Mike Taylor of the FDA. Many members remained skeptical about the FDA’s ability to understand the cheese industry, but the best comment I heard came from Kathy at Whole Foods: “It’s the power of education within our own industry that the FDA now recognizes and respects.” 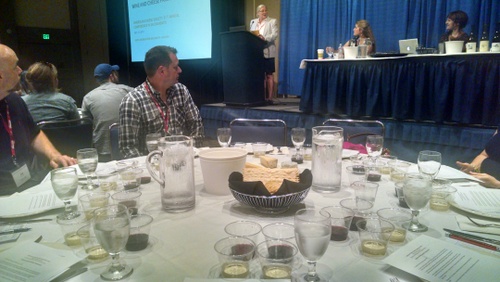 Finally some fun! Author and wine and cheese consultant Kirstin Jackson led us through a tasting and comparison of combinations that she and Anita Oberholster (from UC Davis) put together to illustrate a FEW of the many successful ideas we can use when doing our own pairings. But before we started chugging and chomping, Jackson gave a very succinct and smart overview of winemaking from a flavor perspective.

The pairings themselves were meant to highlight two wine flavor components and their effects on cheese pairings: wood and acid.

To illustrate the effect of wood flavors they chose two different California chardonnay white wines (although this will apply to any white wine from around the world): one that was specifically UN-oaked, and one that had just a bit of oak added to it. These were “naturally” paired with young cheeses: a lactic set Geo aged goat cheese (Vermont Creamery’s “Bonne Bouche”) and a traditional bloomy cheese (Alemar Cheese’s “Bent River”). The UN-oaked wine paired exceptionally well with the Bonne Bouche, and not so well with the Brie-style cheese. And the wine with a bit of oak tasted even better when paired with the bloomy cheese, but clashed with the acid aspects of the Bonne Bouche.

Over in the red categories they had a young pinot noir from Sonoma and an older (2010) cabernet sauvignon from Napa paired with two older harder cheeses: Valley Ford‘s Estero Gold Reserve (cow) and Goot Essa‘s Felsa Yehr (sheep). The Estero Gold’s mellow flavors paired perfectly with the light fruitiness of the pinot noir, but stomped on by the Big cabernet. On the other hand, the very rich sheep cheese could stand up to the cabernet, but it completely erased all of the subtle flavors in the pinot noir.

It turns out that

as familiar as the Wine And Cheese Pairing is in our world, it’s a very tricky trial. For the same reason that we love the aged flavor complexity in good wine and good cheese it means there are a lot of ‘moving parts’ that have to mesh together when combining them. One of the “rules” often sited is you should pair the wine with a cheese from the same region, which might work if you’re focused only on European wine and cheese, but with the abundance of high quality American wine and cheese of many different styles and traditions, it is better to learn a little bit about the categories of both that can help in a successful pairing. I thought this session was extremely informative. And tasty.

Alas there were no award winners from Maine this year, but I suspect that there were very few entries as well given how far we were going to have to ship our cheeses and how few of us could travel out to the conference to represent them.

The awards show was still enjoyable, and especially fun to recognize a few more award winners personally, having sat next to them at lunch or traveled with them on my Tuesday tour. There were two interesting items that I picked up on this year: