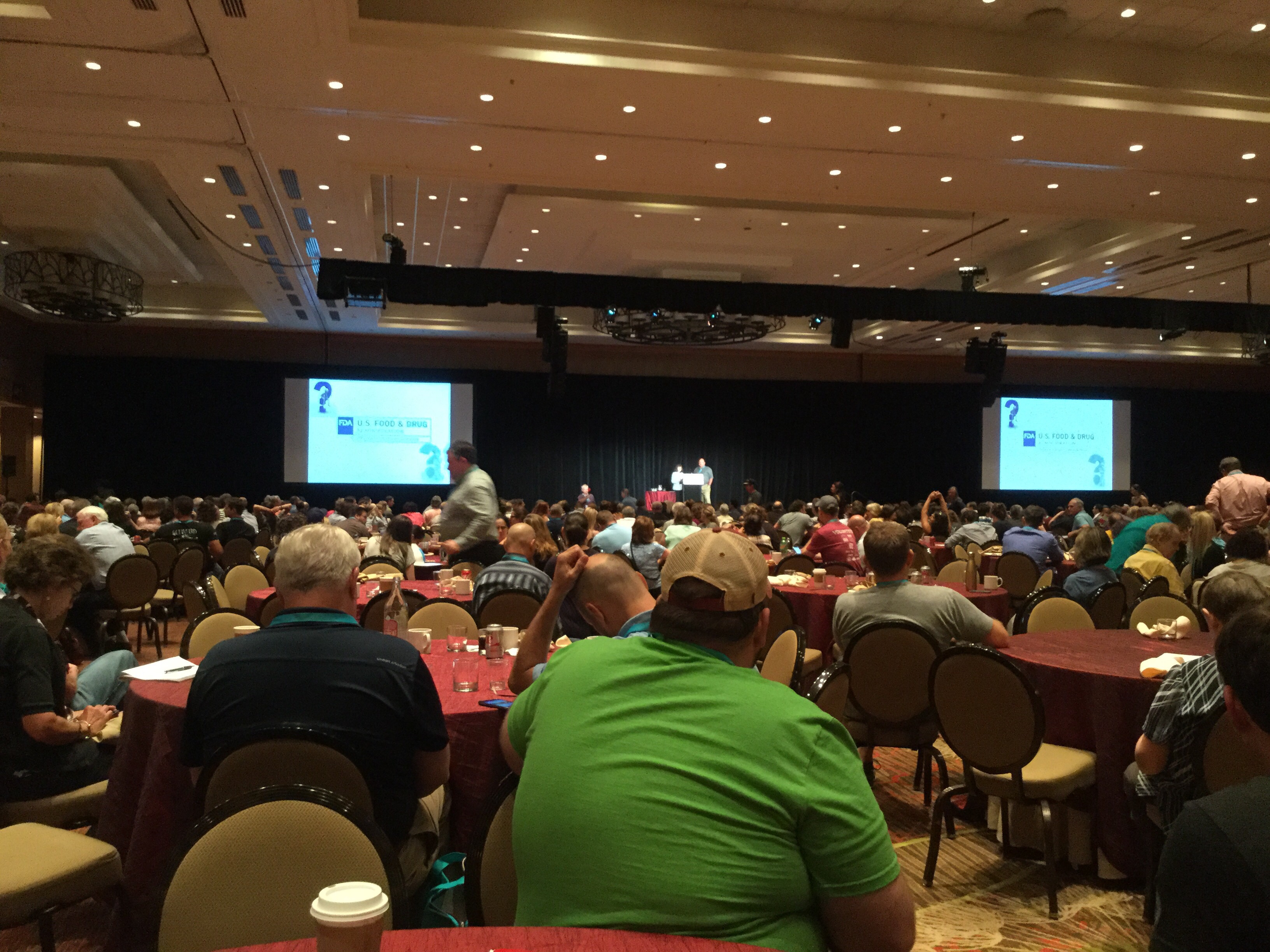 At recent conferences Friday is an early morning because that has been when ACS has scheduled a Guild Leaders meeting where all the Guilds can get together and talk through questions and issues surrounding how to run a good Guild. This year we had representatives from Maine, the SouthEast, Rocky Mountains area, MA, OR, VT, WA, PA, NH, BKLN(!), MN, IA, NY State, and CT. I was there to talk about the new Cheese Guilds Network website that I’m developing to try to facilitate Guild communication year-round. Jessie and Arlene were also there representing Maine.

Among the topics we covered were the new resources that ACS has rolled out for members, such as the Safe Cheesemaking Hub, Envirnmental Testing buying clubs, Guild festivals and the staff needed, education for retailers beyond the CCP certification offered once a year at ACS, regional cooperation on workshops and festivals, new on-line food safety resources, and the advent of more efforts to deregulate dairy and other food processing.

There was a LOT of good information that was shared, and although the session was slated to go one hour, it want well over 90 minutes and hopefully will continue on-line soon on a new network for just that purpose —

— I found it very productive, and I think many of the other participants did as well. We learned a lot of excellent infomation that I’m sure we will share with the rest of the Guild in more detail at our August meeting.

Meanwhile the theme of my morning morning becomes…

A SURVIVORS GUIDE TO THE PC RULES

Michael Kalish (who has taught an affinage workshop for us in Maine) and his twin brother Charlie led this deep dive into the hundreds and hundreds of pages that make up the now active FDA regulatory program based on the Food Safety and Modernization Act (FSMA). Both Michael and Charlie consult with many businesses on food safety practices and they are both now trained as Lead Trainers for PCQI training when they are not competing on the Food Network as The Cheese Twins.

FSMA has begun implementation for LARGE companies (>500 employees) only in 2017, and the FDA has begun their auditing and inspections which they hope to complete by the end of the year, but have recently admitted that they are a bit behind on their goals. Implementation for SMALL companies (<500 employees but > $1 million in sales and inventory) is scheduled to begin in 2018, and then ALL companies (including those averaging under $1 million in sales over the past three years who wish to apply to be classified as “Qualified Producers”) is still scheduled to take affect in December of 2018.

Qualified Producers will still be required to follow the same Good Manufacturing Practices (GMP) as everyone else, but (depending on how Maine’s state inspectors decide to incorporate FSMA principles into the State licensing guidelines) may not be required to always employ and staff during production a “Qualified Individual” or create and maintain all of the Preventative Controls (PC) paperwork.

For those SMALL Maine food processors, and those who do not wish to apply to become a Qualified Facility, the Kalishes stepped through an outline of the important aspects of what will will be necessary to pass the inevitable FDA audit. Primarily this involves becoming familiar with US Code Title 21 CFR 117, which are the regulations with the regard to the production of Human Food. There are seven parts (a – g) but the most important ones are a) General Provisions, b) of the “modernized” GMP, c) what used to be called the Hazards Analysis and Requirements for Preventative Controls but is now simply your “Food Safety Plan”, and g) your Supply Chain Program.

The other thing that cheese makers IN PARTICULAR will need to be familiar with (whether they become a Qualified Facility or not) is the FDA Guideance on Listeria Prevention, which is currently in the draft stage having just accepted public comments, but is most likely to be implemented much as it is currently written.

The Kalishes made many good observations about the best way to approach the entire effort to get to compliance with the (still evolving) FSMA regulations and I would be hppy to go through my notes in detail with anyone who would like me to do that. Arlene and Carrie also attended this workshop, so they might also be able to walk through what we learned. There are also many resources available, beginning with the FDAs own central web repository of information. The FDA is also “tantalizingly close” to releasing a FREE Windows application called the Food Safety Plan Builder, which will allow you to plug in your company’s particulars and it will lead you step-by-step through the process of generating all the necessary forms to create a compliant Food Safety Plan. And right now, at least through the end of 2017, ACS members will have FREE access to an on-line Food Safety Training Course developed by NC State University that incorporates FSMA principles. We will have more information about this offer that would normally cost $149 (still an incredible deal) at our August meeting so stay tuned.

Breathe in. Breathe out. 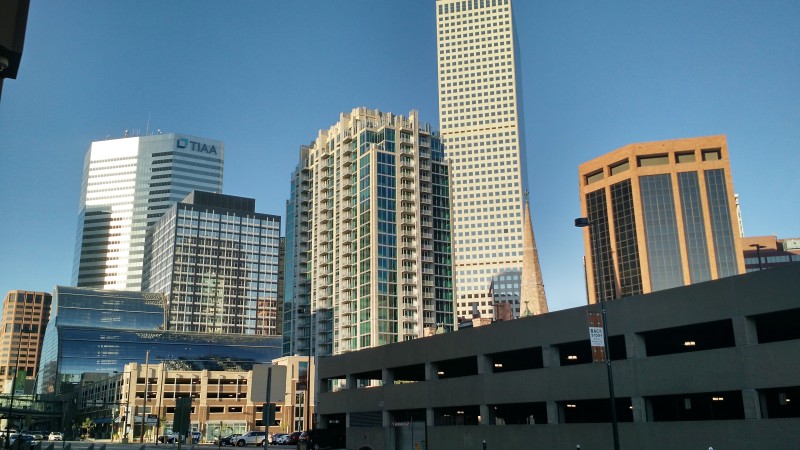 For the last few ACS Conferences the FDA has sent a representative to speak to the membership directly about its increasingly focused regulatory work in the cheese world. Beginning with their botched announcement about the use of wooden boards in aging facilities the ACS has realized it is critical for the artisan cheese industry to help the FDA understand the industry better rather than the remain in a constant state of defensive vigilence waiting for the next “pronoucement” from this regulatory agency. This effort has seemed to pay off in better relations as well as better decisons so far.

At lunch today we heard from Jenny Scott, FDA Senior Advisor in the Office of Food Safety and Applied Nutrition. Instead of regurgitating my four pages of notes on her presentation (I posted an image of my view of it at the top of the page), I’ll hit the highlights:

And now for something completely different.

Four cheese pairing specialists (I didn’t know there was such a thing, either) hosted another tasting that I signed up for in the afternoon. (Rachel Perez, Leigh Friend, Kirsten Jackson, and Tia Keenan) each contributed one or two differnt pairing that we tried with three different cheeses and many different compliments.

In their opening remarks Keenan defined a pairing as the idea of a social experience as much as of a culinary experience. She also reminded us that “mindfulness begins by thinking about who will be sharing the pairing and what state of mind we want that pairing to be experienced.” In other words an informal barside pairing shouldn’t require the total concentration of the diners. Llikewise layers of pairing elements are appreciated in a quiet multi-course experience.

Jackson spoke about the “Third Experience” when two flavors combine to form a completely new flavor. Friend provided a tip about using the temperature of each pairing ingredient to adjust the experience: warm temperatures intensify flavors, especially when combined with cheese which will liquify and spread more completely in the mouth when it’s served at a warmer temperature. And when items are chilled, their flavors can be muted. She gave the example of chilling a horseradish sauce if there’s a danger that the fiery root might overwhelm the other, perhaps subtler, components.

And with that the pairings began! 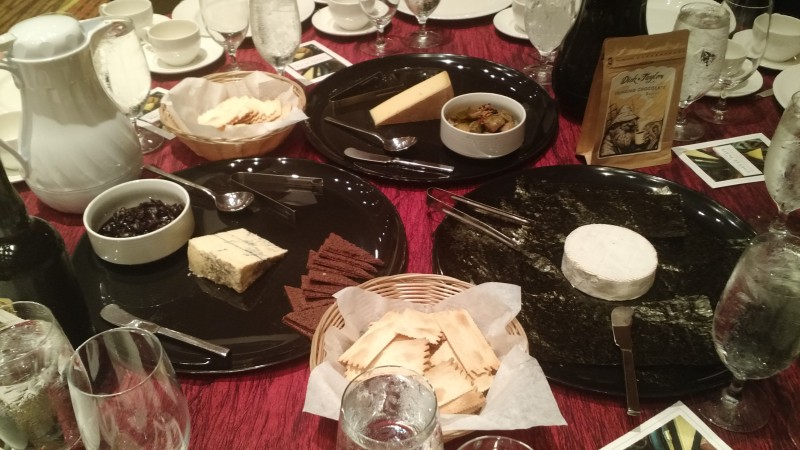 The first combined Le Pommier Camembert with sheets of nori. We rolled a small piece of Camembert in a small sheet of nori and then ate it like a little savory burrito. I think this was a pairing of Perez who said that the particular Camembert we were eating always reminded her of the smell of the ocean air because of a dominent briny note in the cheese, so in this case she picked up on that and trebled the umami adding the nori sheet. I really liked this pairing, but many otheres had trouble working through the sushi ingredient out of its element and didn’t enjoy it as much as I did.

Next Jackson combined the Chollerhocker — as Swiss alpine cheese with a rind washed with a spiced brine — with some hickory smoked pickled brussels sprouts. The super rich and beefy cheese was really set off by the sour of the pickle and the light drift of smoke and sulphur funk of the sprouts. This was another winner in my book, and a lot more of the crowd jumped on this bandwagon.

The following pairings got more complex. A Rogue Creamery Hazelnut Smoked Blue was paired with a sour cherry compote on top of a chocolate graham triangle made with 61% chocolate shavings. I think that it was Friend who said this reminded her of a campfire S’more with the cheese adding the gooey marshmallow notes plus the campfire smoke. I’m less sweet tolerant so I appreciated the combination and it tasted balanced, it didn’t win me over the way it did most of the others in the room.

(And then I “went Rogue” by sneaking a piece of the blue cheese into another piece of nori. I was good, but not as perfect as the Camembert combo.)

Now we started pairing liquids, beginning with a Big B’s Cider from Oregon called “Hoppearcot” together with the briny Camembert. The cider was a wee bit too sweet for my palate and the briny funk of the cheese couldn’t cut that for me. Others, though seemed to enjoy it, especially a woman a few spots to my left.

The last two bounced confidently away from the stereotypical alcoholic beverages, first with an intense drinking chocolate cocktail made from chocolate and hot water in equal parts, and splashes of half and half, Agnostura bitters, and bourbon. We only needed to pour about a Tablespoon in our cups to enjoy it in perfect proportion with bites of the Chollerhocker and the smoky blue. It was very good with them both.

Then they challenged us with a hot cup of Yogi Licorice Tea which paired especially well with the smoky blue, and only so so with the alpine cheese because the tea’s thick sweetness nullified the brothy spicy meaty flavors of the cheese. 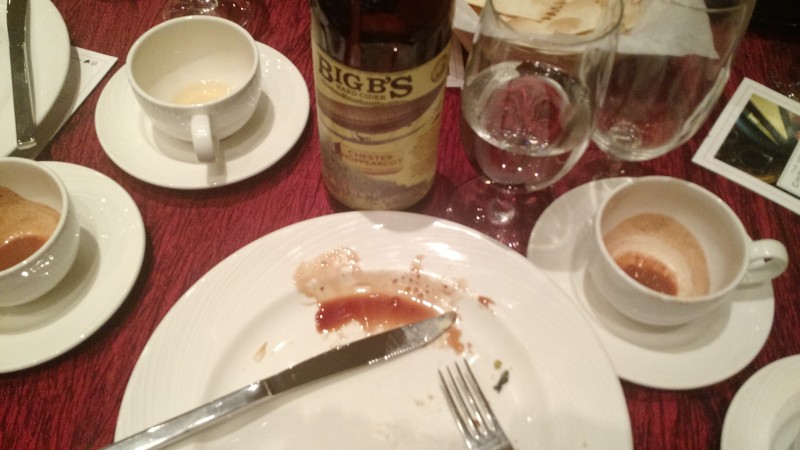 So I learned about the opportunity to create different experiences with a few simple or complex components, and best of all they all included cheese!

AWARD TIME! See the next post for annuncements about Maine winners in a record-breaking year for the largest cheese competition in North America… 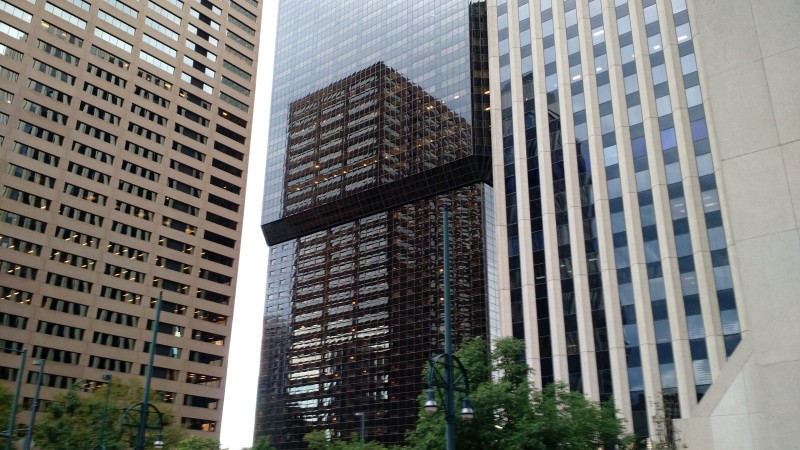